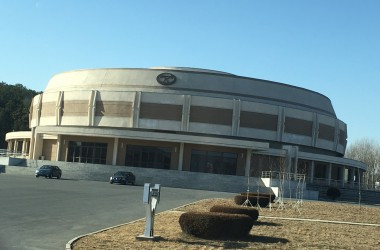 South Korea is among the countries competing at the Asian Youth and Junior Weightlifting Championships, which began in North Korea’s capital Pyongyang today.

As reported by Yonhap, around 70 South Koreans arrived in Pyongyang via Beijing on Friday (October 18).

Thirty-eight of these were athletes, marking the largest number among the 15 participating countries at the event, while the rest were journalists and staff.

The Opening Ceremony began with the appearance of signs representing the 15 participating nations at the Weightlifting Hall on Chongchun Street.

The sign contained South Korea's national flag, and the text "Daehanminguk", meaning Republic of Korea (ROK) in Korean and the English acronym of the ROK.

Action at the Asian Youth and Junior Weightlifting Championships is due to run until Sunday (October 27).

The event comes hot on the heels of last week's 0-0 draw between North Korea and South Korea in an historic qualifier for the 2022 FIFA World Cup in Qatar, marking the first competitive men's match between the two countries to be held in Pyongyang.

There was no live broadcast of the match at Kim Il Sung Stadium, played out in front of empty stands with South Korean media and supporters barred from attending.

All foreign media were also prohibited by the North, while only minimal updates from the match were provided by FIFA and the Asian Football Confederation.

South Korean Unification Ministry spokesman Lee Sang-min claimed it had tried to "sound the North out several times" to allow fans access to the stadium and for the qualifier to be broadcast on television.

FIFA President Gianni Infantino was among the limited number of spectators.

The Korea Football Association has since called on the Asian Football Confederation to consider sanctions against the North.