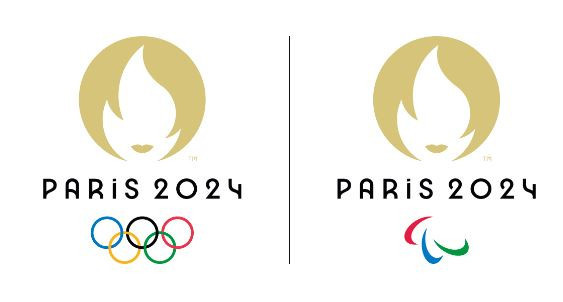 Paris 2024 organisers staged a coup de théâtre at the Grand Rex here tonight as they launched a new Olympic and Paralympic Games emblem - shared for the first time in Olympic history - to embody their widening vision of the Games.

The emblem contains within it three key elements - a gold medal, to represent sport, an Olympic and Paralympic flame and the lips that create the face of a woman, in this case a representation of Marianne, a historic personification of France.

The design, with art deco lettering that harks back to Paris staging the 1924 Games, is something of a trompe l'oeil, in that one can see a medal, or a face, or a flame at different times.

For the Paris 2024 President Tony Estanguet, the primary statement of the evening was the shared logo.

"It was key for us since the beginning of this project," he told insidethegames in the crowded aftermath of an event that had been witnessed by French Sports Minister Roxana Mărăcineanu, Paris Mayor Anne Hidalgo and athletes such Renaud Lavillenie, the world pole vault record holder.

"Both Olympians and Paralympians were very active.

"On every presentation, on every trip we had all over the world, in our team it was an Olympic and a Paralympic team.

"We have a strong ambition in terms of celebration.

"We will have the same venues, at the foot of the Eiffel Tower, the Chateau Versailles, all those kind of iconic venues will be used for the Olympic and Paralympic Games.

"And also in terms of legacy we believe that in this country we need to strengthen the place of sport in the daily life of the people, and whatever the age, whatever the disability or not, you have a place and a role to play in the success of Paris 2024.

"So in terms of celebration, in terms of legacy, we have the same ambition for the Olympic and Paralympic Games and we are so happy to be able to demonstrate this ambition in the same identity.

"And to have the same logo – it’s a kind of very strong message."

The original bid logo used by Paris, depicting both the iconic tower and the number 24 in the same graphic, was one of the smartest and most effective ever seen.

But after announcing their plans for a new emblem during a presentation to the Association of National Olympic Committees General Assembly in Doha last week, Paris 2024 organisers told insidethegames that the image would not include the Eiffel Tower.

"I like the three symbols at the same time," Estanguet added.

"The sport - with the medal, the flame - the Olympic and Paralympic flame - and the face.

"Because for me it’s the three main messages we want to demonstrate with Paris 2024.

"In our DNA it’s about sport.

"And about the power and the magic of the Games.

"And in our DNA it’s for people.

"Our bid message was - 'Made for Sharing' and we continue with this idea of putting people in the centre of the Games."

The medal, the flame, Marianne
Here is the new face of the Olympic and Paralympic Games of #Paris2024 pic.twitter.com/6VvsItrql6

The Grand Rex was a suitably imposing venue for the launch, given its sumptuous decorations and reputation as being the largest cinema theatre in Europe.

It was built in 1932 at the instigation of Jacques Haik, a wealthy film producer known for having introduced Charlie Chaplin to France, who wanted to create the most beautiful movie theatre in France where cinema-goers would feel they were watching in the open air.

The Grand Rex has also hosted numerous concerts down the years by, among others, the Pet Shop Boys, Joan Baez, Take That, Jane Birkin and Madonna.

Speaking in Doha, Etienne Thobois, the Paris 2024 chief executive, said: "This is part of a rebooting exercise.

"We want this new logo to express better our values, who we are and our ambition.

"We want this logo to say something about the Paris 2024 vision: ‘The benefit of society and the benefit for all.’”

Thobois began his address by pointing out to delegates that there was, deliberately, no branding involved in either his presentation or upon his person.