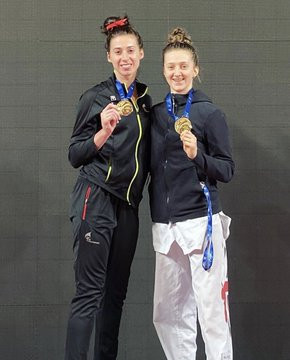 Bianca Walkden and Lauren Williams won their respective events on a successful final day for Great Britain at the G4 Extra European Taekwondo Championships in Bari.

Today's other gold medallist was Russia's Aiukaev Rafail, who was crowned the men's over-80kg champion after Germany's Alexander Bachmann withdrew from the final.

Rounding off the podium were Slovenia's Ivan Konrad Trajkovic and Italy's Roberto Botta.

With taekwondo dropped from the European Games programme after the inaugural edition in Baku in 2015, the event in Bari aimed to compensate European athletes who would have otherwise missed out on the opportunity to collect ranking points for next year's Olympic Games in Tokyo.

"It was really disappointing that taekwondo wasn't included in the multi-sport event," Walkden told BBC Sport.

"But I'm glad we still had a competition and it's all experience ahead of the Olympics where I'm hoping to do bigger and better things."