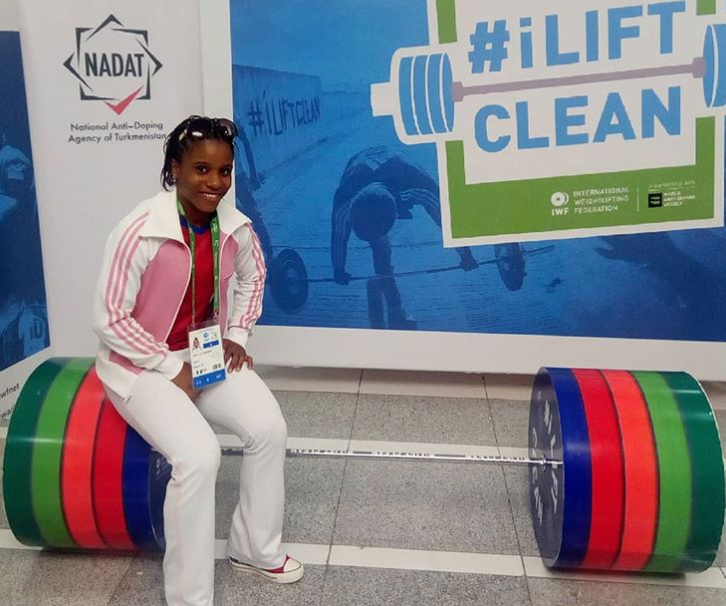 A Nigerian weightlifter stripped of a Commonwealth Games gold medal for doping when she was 16 years old has tested positive again and faces an eight-year ban from the sport.

Chika Amalaha, whose sample showed traces of steroids, is the third Nigerian woman to have twice tested positive in recent years - all of them continental champions.

The past seven Nigerian doping violations announced by the International Weightlifting federation (IWF) are all female, and there are two cases yet to be closed, also women.

Amalaha, 22, made her three best career totals in her past three competitions and was all but certain of a place at the Tokyo 2020 Olympic Games in the 55kg category.

She won this year's African Championships, was second at the recent All-African Games, and finished 12th at the 2018 IWF World Championships, where she posed at the IWF's "Lift Clean" display and posted a photo on Instagram.

Elizabeth Onuah, 24, was suspended for eight years in 2015 and disqualified from first place at the All-African Games of that year, having already been banned as a 15-year-old for doping.

In June this year, Balikis Otunla, 25, a continental champion at 75kg and 81kg, came up positive for steroids for the second time, having been suspended for two years in 2012.

Amalaha was disqualified at the Glasgow 2014 Commonwealth Games when she tested positive for masking agents and banned for two years.

Her positive sample is believed to be from the All-African Games in Morocco in August, where the Egypt team landed in so much trouble.

Earlier reports suggested that five Egyptians had tested positive in Rabat, but the local organising committee has informed the IWF that the number was six.

The Egyptian Weightlifting Federation, which has had 13 athletes test positive in the past three years, including several teenagers, had already been banned from international competition for two years before the Rabat positives, and has been suspended by the Egypt National Olympic Committee.

A 17-year-old Uzbekistan lifter, Saidmukhtor Saidakhrorov, has also been provisionally suspended for a doping violation.

If the three outstanding violations by Uzbek lifters are confirmed, it will take the running total for Uzbekistan to 17, close to the limit of 20 that would further cut their Olympic quota to two places.

In welcome news for Uzbekistan, Kumushkhon Fayzullaeva set a youth world record at the Alexander Cup in Grodno, Belarus - the first competition in the third and final six-month phase of Olympic qualifying.

It was held in memory of the great Belarus lifter Alexander Kurlovich, who won Olympic gold for the Soviet Union in 1988 and was a long-standing member of the IWF executive board.

China finished well clear in the medals table and are expected to do the same at the IWF Grand Prix in Lima, Peru, a "silver" Olympic qualifier that starts on Friday.