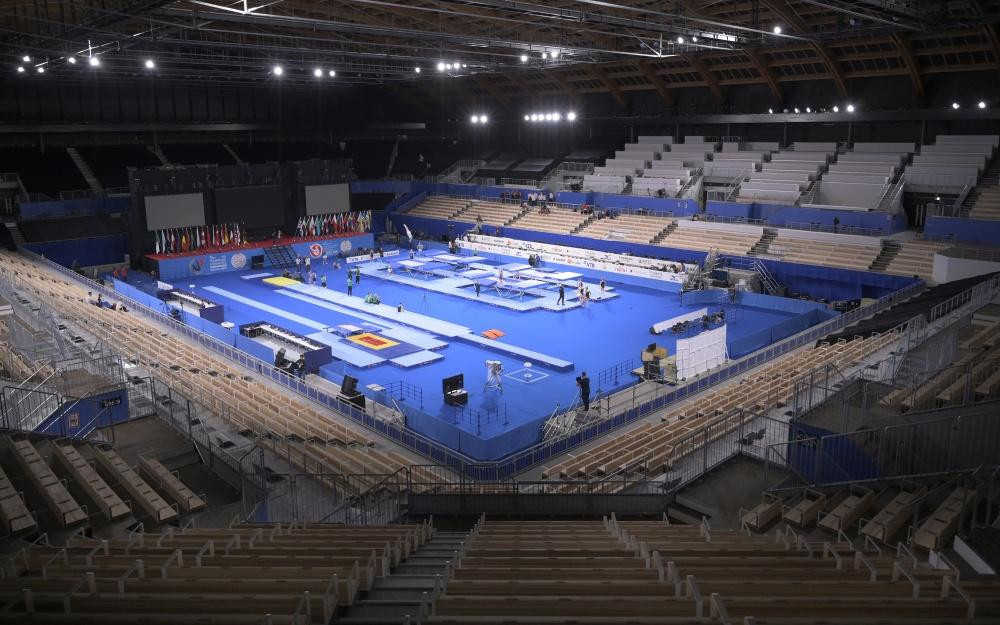 The 2019 International Gymnastics Federation (FIG) Trampoline World Championships are set to take place in Tokyo over the coming four days, doubling as the discipline's official test event for next year's Olympic Games in Japan's capital.

A total of 336 gymnasts representing 37 nations will be chasing 15 gold medals at the city's new Ariake Gymnastics Centre.

There will be the added incentive for the individual trampoline specialists of up to 16 Olympic qualification berths on offer.

With a maximum of one place per nation, the eight finalists in both the men's and women's individual events will qualify one quota place for their country for Tokyo 2020.

In tumbling and double mini-trampoline, the six highest-placed finalists of the men's and women's individual competitions will qualify one quota place for their country for the 2021 World Games in Birmingham, Alabama, also with a maximum of one place per nation.

The FIG claim the Ariake Gymnastics Centre is the ideal venue for the Trampoline World Championships, with the needs of top-class, modern gymnastics prominent throughout the design and construction.

"These Championships will create the very first memories in this arena, with plenty more exciting ones to come in the future," FIG President Morinari Watanabe said on the eve of competition.

"We cannot wait to open the doors and welcome the world in."

He added: "We are honoured the 34th FIG Trampoline Gymnastics World Championships is the very first event to take place in the magnificent Ariake Gymnastics Centre.

"Not only will our athletes get a taste of the atmosphere and the venue ahead of the Tokyo 2020 Olympic Games, but our Championships will benefit from the unique nature of the design.

"Thanks to the large wooden roof beams there are no pillars at all, meaning the arena is open and spacious - perfect for gymnasts and spectators alike."

As well as going head-to-head for gold medals in individual trampoline, synchronised trampoline, double mini-trampoline and tumbling, gymnasts will also be teaming up in pursuit of team titles in each discipline, before combining for the mixed-gender all-around team competition.

In the men's individual event, China's legendary trampolinists Dong Dong and Gao Lei will be looking to hold off the challenge of the in-form Rio 2016 Olympic gold medallist Uladzislau Hancharou of Belarus.

As for the women's equivalent, London 2012 and Rio 2016 Olympic champion Rosie MacLennan of Canada will be just as desperate to keep the best of the rest at bay and book her ticket to Tokyo 2020.

In double mini-trampoline, the biggest question is whether can anyone stop six-time world champion Mikhail Zalomin of Russia from claiming yet another major global crown.

The soon-to-retire Diogo Carvalho Costa of Portugal and 2018 world silver medallist Ruben Padilla of the United States will be among his main challengers.

While 10-time world champion Jia Fangfang of China has recently pulled out of competing in Tokyo, it does give someone other than the Chinese superstar a chance to grab a first global crown in women's tumbling since Great Britain's Rachael Letsche in 2014.

"Since this competition will be the inaugural event of the Centre, you could say it will become the preliminary skirmish of the Olympic Games," Hidenori Futagi, President of the Japan Gymnastics Association, said.

"Many of the top gymnasts attending this World Championships are aiming for a place at the Olympic Games and all will represent future generations."

Japan last hosted the FIG Trampoline World Championships in Osaka in 1984 and France's Lionel Pioline, who won the men's individual gold medal, synchronised trampoline bronze and team bronze on that occasion is back as an ambassador for the event.

He is joined by the highly decorated German Anna Dogonadze.

During an incredibly distinguished career, she was the Athens 2004 Olympic gold medallist and 2001 world champion.