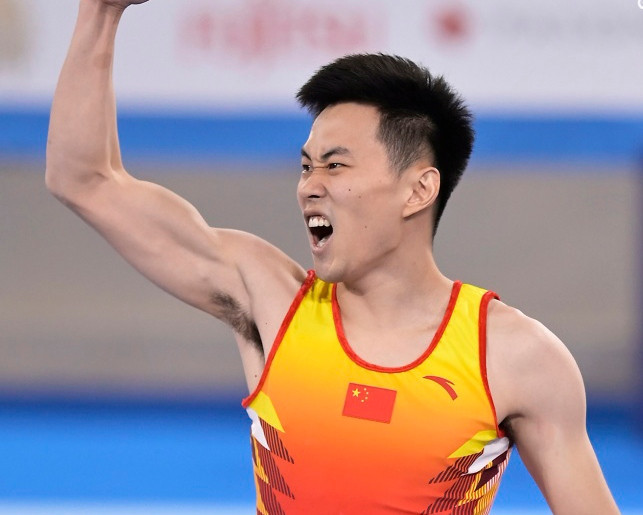 China’s Gao Lei became the first man in history to win four individual trampoline world titles in succession as the 2019 Trampoline Gymnastics World Championships came to a close in Tokyo.

There were wild celebrations amid the home spectators in the Ariake Gymnastic Centre - the venue for the sport at next year's Olympic Games in the Japanese capital - as 20-year-old Hikaru Mori secured a second gold medal of the Championships, securing her country a Tokyo 2020 spot in the trampoline.

Gao earned his fourth successive gold by a margin of 0.185 points after Ivan Litvinovich of Belarus had posted a score of 61.705 that looked capable of being a winning one in this event that doubled as a Tokyo 2020 test event.

"He is so good at controlling exactly where he wants to be on the trampoline," said Litvinovich.

The Belarusian almost had but thanks to a higher difficulty score and almost as clean an execution the defending champion was successful again.

His attention now turns towards Tokyo 2020 and, having secured a spot for China, the 27-year-old is determined to follow teammate Dong Dong - a bronze medallist in this event - in winning Olympic gold.

When you become #Trampoline World Champion? in the @Tokyo2020 Olympic #Gymnastics venue in your home town #GTR2019Tokyo. ? @hikapoline pic.twitter.com/yXYopMmtVr

Mori, who helped the hosts win the team event on the previous day, looked at ease from the moment she stepped on to the trampoline with a beautifully smooth display delivering victory by 0.635 points.

Her coach Akiko Maruyama subsequently admitted that Mori, who is now the 2018 synchro, 2019 team and 2019 Individual world champion, is outdoing even her projections.

"We have a five-year plan, from when she was 16 to the Tokyo Olympics, but the goal here was for a medal, not two golds," Maruyama laughed.

Russia’s Aleksandr Lisitsyn produced a pair of barely seen before passes to shock his peers and win the men’s tumbling final by a massive margin of 1.5 points.

"It went the way I expected, our goal was not just to win but to do combinations no one else does," Lidia Zakharova, Lisitsyn’s coach, said.

"That’s why the judges liked him."

Lisitsyn revealed that he had been working on the double back triple twist element in his second pass all year and credited Zakharova with having transformed his career.

The 21-year-old had never before reached a major championship final as a senior but he relegated Britain’s Elliott Browne to second successive silver, while 18-year-old Kaden Brown of the United States took bronze.

Sweden’s Lina Sjoeberg secured her second women’s double mini-trampoline World Championship title in a row ahead of New Zealander Bronwyn Dibb by a margin of 0.200 points.

The concluding all around team final brought the Championships to a close, with Russia securing gold.

With the title seemingly secured Russia’s men’s synchro pair bounced out early putting all the pressure on the final competitor of all, men’s tumbler Vadim Afanasev.

The 2018 individual tumbling world champion knew he had to produce something close to his best to hold off the US and in a fervent atmosphere he did just that to take the discipline win and give Russia gold by a single point.