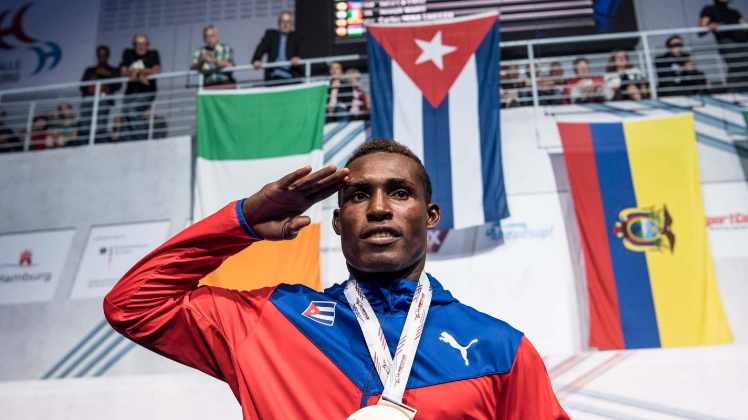 Six boxers from five continents have been elected as members of the International Boxing Association (AIBA) Athletes’ Commission.

Ukraine’s Oleksandr Khyzhniak, the 2017 world middleweight champion, and Italy’s Irma Testa are the two representatives of the European Boxing Confederation.

Two of the six members - one man and one woman - will be elected as chairperson and vice-chairperson by the AIBA Athletes' Commission itself and will also serve as AIBA Executive Committee members.

The election of the Athletes' Commission members was organised during the 2019 AIBA Men’s and Women’s World Championships hosted by the Russian cities of Yekaterinburg and Ulan-Ude respectively.

Boxers from all over the world voted for new members.

Also listed on AIBA's website as being on the Athletes' Commission are Ukraine’s Iuliia Tsyplakova, Italy’s Clemente Russo and Germany’s Annemarie Stark.

In February, César La Cruz and Stark were appointed as interim representatives of the then newly-formed Commission, which AIBA said had been set-up "in an effort to include the voice of boxers from around the world".

AIBA's Executive Committee passed initiatives for the election of the Athletes' Commission during a meeting in Istanbul.

National Federations had the opportunity to nominate athletes for the positions.

Stark, a four-time German champion, and César La Cruz, a four-time world champion and Rio 2016 Olympic gold medallist at light heavyweight, were appointed to their roles in the meantime.

The announcement of the make-up of the Athletes' Commission comes amid troubled times for AIBA.

Last week, insidethegames exclusively revealed Swiss sports lawyer François Carrard has turned down a role which would have seen him help AIBA devise its new statues"in order to prevent any appearance of potential conflicts of interest".

AIBA hopes a revamp of its statutes will count in its favour as it bids to regain recognition from the International Olympic Committee (IOC) in time for Paris 2024.

Governance issues were a factor in the IOC stripping AIBA of its status in June.

A Presidential election is planned for an Extraordinary Congress in March next year, although some Executive Committee members have cast doubt on the chances of this taking place.

Under AIBA's current statutes, an election must be staged no later than 365 days after the appointment of the Interim President.

Mohamed Moustahsane, who reversed a decision to step down from the position in September and will continue through to the election in March, became Interim President on March 29 this year.