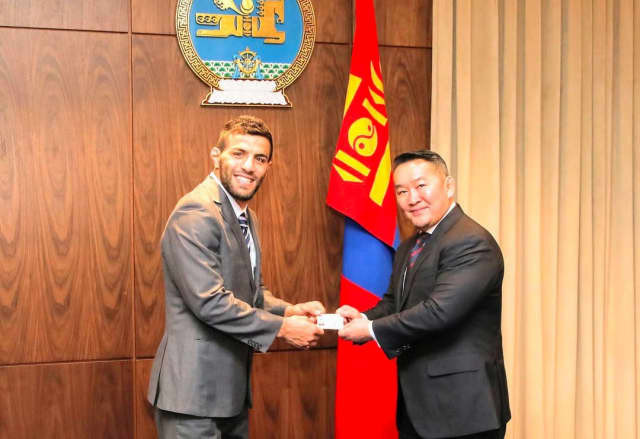 Saeid Mollaei has been cleared to compete for Mongolia and could represent the nation at next year's Olympic Games following his defection from Iran, after being ordered to throw his semi-final at this year's World Judo Championships rather than set up a potential clash with a rival from Israel.

The International Judo Federation (IJF) confirmed it had given the 27-year-old, granted asylum in Germany after Iran threatened him and his family if he did not withdraw or deliberately lose his semi-final, the green light to participate for Mongolia.

Mollaei was given Mongolian citizenship during a meeting with the nation's President Khaltmaagiin Battulga, who also heads the Mongolian Judo Federation.

In a statement, the worldwide body said Mollaei, the 2018 world champion in the under-81 kilograms category, was expected to compete for the country for the first time at this month's Qingdao Masters.

He competed briefly as a refugee after the IJF claimed he cannot return to his country and amid concerns over the safety of his family.

Being granted a Mongolian passport could pave the way for Mollaei to represent the country at Tokyo 2020, but any change of allegiance to his adopted country would have to be approved by the International Olympic Committee Executive Board.

The IOC Executive Board is due to hold a three-day meeting starting here tomorrow.

Mollaei, the current world number three, had been defending his title at the World Championships in Tokyo in August when he faced pressure from Iran.

He lost his semi-final and then went on to lose his third-place fight.

Mollaei alleged he had been instructed to withdraw from the competition by Arash Miresmaeili and Reza Salehi Amiri, Presidents of the Iran Judo Federation and the National Olympic Committee of the Islamic Republic of Iran, respectively.

It prompted the IJF to officially suspend the country, which may be barred from competing in the sport at Tokyo 2020.

Iranian athletes have been prohibited from competing in any sport against Israelis for years.