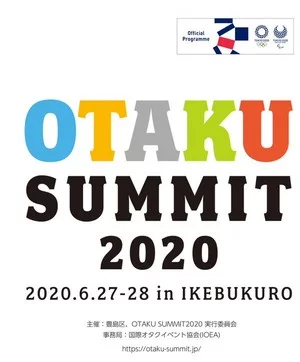 International Otaku Expo Association (IOEA) are set to hold a summit alongside next year's Olympic Games in Tokyo.

The organisation has confirmed a summit will take place in the Japanese capital on June 27 and 28 next year.

The event is expected to feature as part of a Tokyo 2020 promotional programme displaying Japanese culture around the Olympic and Paralympic Games.

Otaku is a term used for people with obsessive interests, particularly in anime and manga.

The Asahi Shimbun reported the Otaku Summit will be held in collaboration with Tokyo’s Toshima Ward.

The Japanese newspaper says the IOEA holds expos and events from across the world to promote the worldwide development of otaku culture.

Cooperative members from reportedly include the Comic Market event in Japan, devoted to self-published comics and fanzines.

Events are also reportedly held in Brazil, Hong Kong, Italy, Spain and the United States as part of the IOEA network.

Anime characters have featured during the build-up to the Tokyo 2020 Olympic and Paralympic Games.

The "G-SATELLITE Go to Space" project will see Mobile Suit Gundam TV series figures Gundam and Zaku sent into space on an 11-inch microsatellite next spring.

It will represent a first time in Olympic and Paralympic history that a satellite will be launched specifically for the Games and orbit the earth independently.

Gundam and Zaku are two of Japan's most popular animated robots and the project will see a recreation of the characters using special materials and paints that can withstand the harsh environment of space.

The Olympic Games are scheduled to take place from July 24 to August 9, with the Paralympics following from August 25 to September 6.