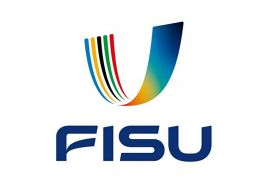 FISU's leadership revealed the design of a new logo at the organisation's General Assembly in Turin during November.

The design was approved by FISU members, ahead of the official adoption at the start of 2020.

The new design is claimed to be key to the ongoing implementation of FISU’s global strategy.

FISU President Oleg Matytsin said the identity could help with the development of the movement and FISU's efforts to build international collaborations.

He claimed the identity can help FISU achieve these goals by giving the organisation more visibility and a greater brand awareness.

The previous logo featured the "U" representing "University", along with the five stars that symbolised the five continents.

The emblem was created by the Italian University Sports Centre (CUSI) during the inaugural Universiade in 1959 in Turin.

The new logo features the five colours in the traditional "U" shape.

Matytsin said the new logo would help to address confusion of FISU having both the "U" and "five stars" logo.

FISU is now expected to begin a gradual rebrand of the Summer and Winter Universiades, the organisation's premier event.

These will eventually become known as the FISU World University Games.

FISU is expected to work with hosts of upcoming Universiades and the World University Championships to implement the identity as part of the branding of the events.