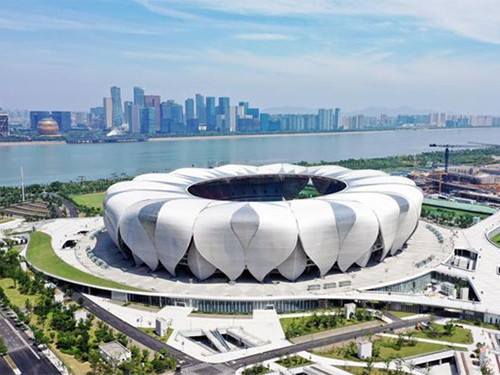 The Chinese city is already scheduled to host the 2022 Asian Games from September 10 to 25.

It has also been chosen to hold games for next year's FIFA Club World Cup, alongside Shanghai, Tianjin, Guangzhou, Wuhan, Shenyang, Jinan and Dalian.

The eight hosting cities were selected following an assessment by FIFA and the Chinese Football Association.

A FIFA research delegation said Hangzhou was selected due to high-quality facilities, stadium and accommodation, as well as convenient transportation.

Holding the competition a year before the Asian Games will give organisers a chance to test the operations and management of the Main Stadium in the Hangzhou Olympic and International Expo Centre, the venue also being used for the Club World Cup.

Nicknamed "Big Lotus", the 80,000-capacity stadium will be the focal point of the 2022 Asian Games, hosting the Opening and Closing Ceremonies and the athletics.

China was appointed host country by the FIFA Council on October 24 in Shanghai.

The revamped event will be held every four years and replaces the seven-team annual competition which has failed to cement itself on the global football calendar.

It is scheduled for June 17 to July 4 2021, in a spot previously reserved for the Confederations Cup.

According to reports, the 24 teams from the six FIFA continents will be split into eight groups of three, with the winners progressing to the quarter-finals.

FIFA is confident teams from Europe will take part in the Club World Cup, despite the European Club Association announcing earlier this year that its clubs would not compete at the first edition in 2021.