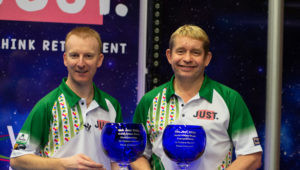 The duo registered a 10-6, 6-8, 2-1 win in an epic encounter at Potters Leisure Resort's International Arena.

Foster and Marshall had been looking to retain their title from last year, but it was not to be for the Scots.

Victory capped off an excellent day's work for Harlow, who reached the last-16 of the open singles event by defeating Australia's Blake Nairn 12-0, 11-5.

Also progressing through to the second round was Scotland's Stewart Anderson, the defending champion and top seed.

Action in Norfolk is due to continue tomorrow.

The mixed pairs final is scheduled to be held along with three second-round matches in the open singles event.