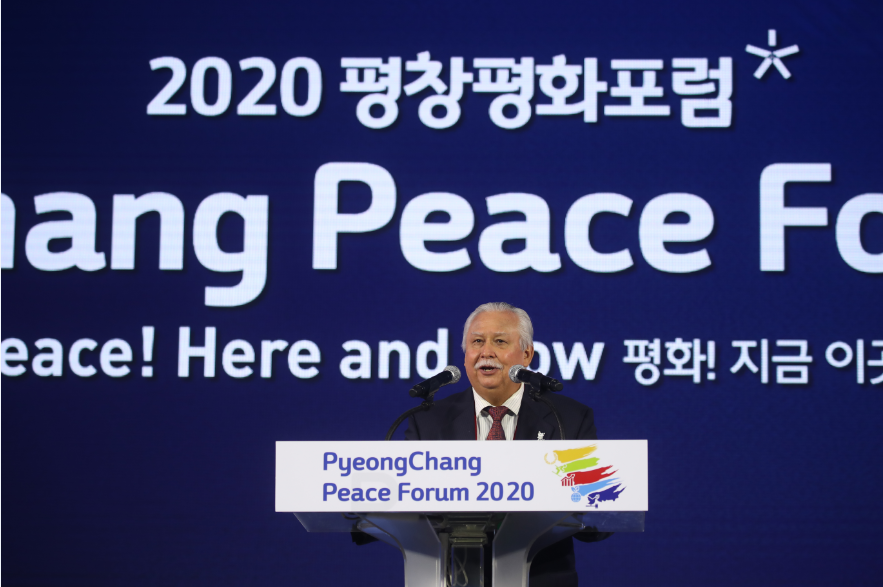 The second anniversary of the Pyeongchang 2018 Winter Olympic Games has been marked with the staging of a Peace Forum in Gangwon Province, where participants agreed on a peace resolution in relation to the Korean Peninsula.

The event, hosted by the Pyeongchang 2018 Legacy Foundation, was held at Pyeongchang Alpensia Convention Center from Sunday (February 9) through to today.

Participants agreed and declared the "Peace Resolution for Building Permanent Peace Regime on the Korean Peninsula", which includes urging South Korea and North Korea, and countries involved, to declare an end to the Korean War and sign the peace treaty.

The global Pyeongchang Peace Forum is led by peace creators and peace builders involved in sports and sustainable development.

Its 2020 edition was held under the slogan of "Peace! Here and Now".

"Action Plan: End the Korean War" was the topic reviewed and discussed to come up with concrete action plans for peace.

Also focused on were specific action plans for peace, such as the new economic development plan for the Korean Peninsula and the DMZ Peace Zone, particularly because inter-Korean peace and trust are seen as being closely connected with regional peace and stability.

Lindberg, the former chair of the Pyeongchang 2018 Coordination Commission, spoke of the strong legacy of the Winter Olympics two years ago and the role of the upcoming Winter Youth Olympic Games (YOG) in Gangwon Province.

"The Youth Olympic Games Gangwon 2024 will continue the strong legacy of the recent Olympic Winter Games in Pyeongchang and work to achieve our vision of expanding new horizons in sport," she said.

"Gangwon 2024 will continue their vision of bringing sport to a new generation of winter athletes.

"The hosting of the Winter YOG leverages the significant investment that the Republic of Korea has made in developing winter sport in the country and throughout Asia."

Pyeongchang 2018 marked a major thaw in relations between North and South Korea.

The two countries marched together under the Korean Unification Flag at the Opening Ceremony and competed together as a united team in the women's ice hockey tournament.

"The Legacy Foundation will continuously deliver the message of peace to the world until it becomes reality."

The IOC has insisted the door remains open for North Korea staging events during the 2024 Winter YOG, despite deteriorating relations in the region.

Pyongyang has consistently criticised Seoul since the collapse of a summit between leader Kim Jong-un and United States President Donald Trump last February.

Should North Korea come on board with hosting the Winter YOG in 2024 – which seems unlikely at this stage – it would be the first time the two countries have jointly organised a major Olympic event.

North and South Korea are still hoping to jointly bid for the 2032 Olympic and Paralympic Games, although chances of their candidacy coming to fruition have diminished amid an almost entire shutdown of inter-Korean dialogue in recent months.