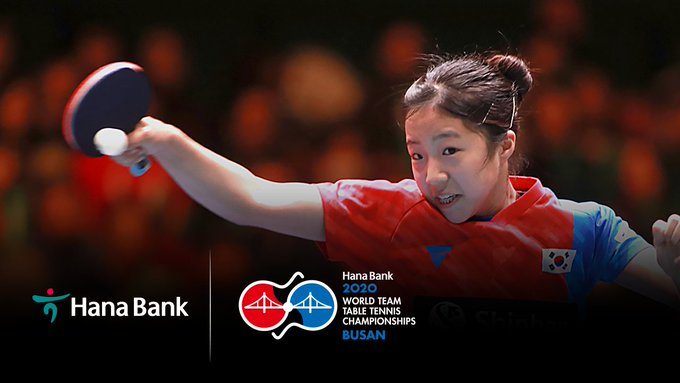 The announcement comes one month before the World Championships in the South Korean city, due to take place from March 22 to 29.

Hana Bank is one of the businesses run by parent company Hana Financial Group, whose headquarters are in Seoul and established in 1967.

"We are thrilled to have Hana Bank coming in as title sponsor of the 2020 World Team Table Tennis Championships and proud to be partnering with one of the top financial institutions in Korea Republic," Pound said.

"We look forward to working with Hana Bank to innovatively activate their brand not just in Korea Republic but globally through not just on court signage but also the ITTF’s 3.5 million social media fans and creative on-site fan engagement.

"We are sure we can take Hana Bank’s brand global through our biggest asset, the World Table Tennis Championships."

The ITTF claim the World Table Tennis Championships is the sport’s greatest annual event, both in historical significance and global interest from players, media and partners.

Singles and doubles competitions took place at last year’s World Championships in Budapest, with attention turning to the team event this year.

As part of the agreement, the ITTF and Hana Bank will work together to attempt to achieve record breaking media figures at next month’s event.

Last year’s event saw television viewers from over 145 countries make up a cumulative audience of 265 million people and cumulative reach of 665 million, according to the ITTF.

"Hana Bank is delighted to be partnering with the ITTF for the 2020 World Team Table Tennis Championships, the sport’s most prestigious event," Lee Ho-Sung, Deputy President and group head of Youngnam Business Group at Hana Bank, said.

"Hana Bank shares many core values with the ITTF and so we look forward to growing together and putting on a show for table tennis fans around the world."

China are the defending champions in both the men’s and women’s team competitions, having triumphed two years ago at Halmstad in Sweden.

The Championships features divisions, with the top 24 teams competing in the highest tier for the world title.