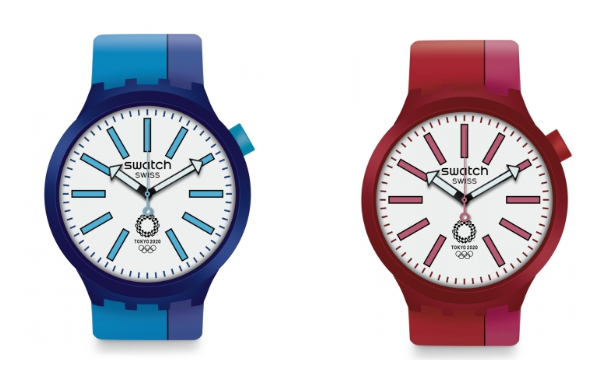 Swatch has launched a series of watches to mark this year's Olympic Games in Tokyo.

Three models were announced by Swatch Japan at the organisation’s headquarters in the Tokyo.

The company say two models are feature as part of their new product line, with "sporty designs" based upon their Big Bold style of watches.

The BB Kurenai Red watch is claimed to express a festive feeling, while the BB Ai Blue design has an indigo shade.

Tokyo 2020 branding has been included on the dial of the watch, as well as the straps.

Both watches will have a 47-millimetre case.

The third watch unveiled is called Tokyo 2020 Blue, which they say expresses the value of the Olympics and passion for sports.

The third design is limited-edition and features Olympic Branding on the strap of the watch.

The watches will be available at Swatch stories in Japan, as well as being available to purchase online in the host country.

The Tokyo 2020 collection has been given the motto "Celebrate the Olympic Spirit".

Omega, part of the Switzerland-based Swatch Group, are a member of the International Olympic Committee (IOC) The Olympic Partner (TOP) programme.

Omega extended their partnership with the IOC through to 2032 back in 2017.

The agreement saw Omega continue as the official timekeeper of the Olympic Games.

The 2032 Summer Olympic will mark Omega’s 100th year since the start of their relationship with the Games at Los Angeles 1932.

Both watches had the Pyeongchang 2018 logo included on a sapphire crystal caseback.