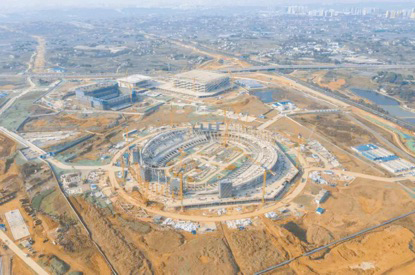 Organisers of the 2021 Summer World University Games in Chengdu have claimed construction work has gathered pace, with confidence expressed that venues will be completed on time even after an unexpected break caused by the coronavirus crisis.

A total of 49 stadiums and gymnasiums will be built or renovated by April 2021, according to organisers.

Competition in the Chinese city is due to take place between August 16 and 27 next year.

Chengdu 2021 have said construction resumed following the coronavirus outbreak which coincided with the Chinese New Year.

The key project is the Dong'an Lake Sports Park, which is set to include a 40,000-capacity stadium, which entered the steel structure construction stage at the end of last year.

The venue is scheduled to host the Opening and Closing Ceremonies for next year’s Games.

Three gymnasiums will also be constructed in the park, including a 15,000-seat complex and a 5,000-seat swimming and diving venue.

A hotel is also being constructed at the Park.

It is claimed the overall project fits into a development plan for the city, with officials aiming to ensure work meets the needs of the local community after the Games.

Chengdu was confirmed as the host for 2021 in March of last year.

Organisers had entered a "pre-attribution contract" with FISU in December 2018 and the city was the sole bidder.

The event will be the first to be called the Summer World University Games after FISU ended the use of Summer Universiade.

Chengdu is also hosting the World Games in 2025.