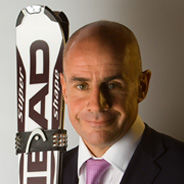 GB Snowsport have announced the organisation will nominate Johan Eliasch as their candidature to become International Ski Federation (FIS) President.

"The Board unanimously voted to support the exciting vision outlined by Johan Eliasch, which matched the ethos of GB Snowsport and its stakeholders," Rory Tapner, GB Snowsport chairman, said.

"We believe he will be well placed to transition FIS into its next growth phase and has the broad experience needed to implement positive and significant change."

Eliasch is the chairman and chief executive of sportswear company Head.

The Swedish billionaire has previously served on the board of the British Paralympic Association from 2002 to 2009.

According to FIS regulations, a member association can propose one candidate to become President, however the candidate does not need to be of the same nationality as the association proposing them.

A deadline of April 22 was set for candidates to be proposed to succeed longstanding FIS President Gian-Franco Kasper.

The biannual gathering of the FIS membership in 2020 is due to be held at the Royal Cliff Resort in Thailand on May 22.

It will be the last under the stewardship of Kasper, who will have served 22 years as President by the time he steps down.

Following the election, the first meeting of the newly composed Council, to be chaired by the Swiss' successor, to scheduled to take place on May 23.

The winner of the election will become the fifth FIS President in the organisation's 98-year history and is set to complete Kasper's four-year term.

Kasper, re-elected in 2018, took over from Marc Hodler in 1998 having served as the secretary general under the Swiss since 1975.