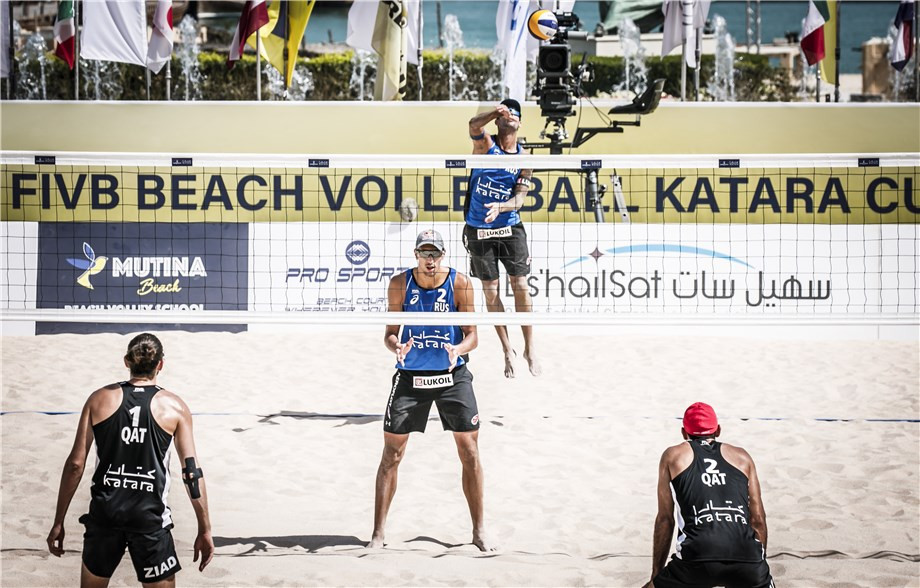 Reigning world champions Oleg Stoyanovskiy and Viacheslav Krasilnikov hit their stride early as they won two from two in Pool A on the first day of the main draw at the International Volleyball Federation (FIVB) Beach World Tour event in Qatar's capital Doha.

They then beat Latvia’s Aleksandrs Samoilovs and Jānis Šmēdiņš 16-21, 21-16, 15-11, with Krasilnikov wrapping up the victory with an ace after Stoyanovskiy had brought up the first match ball by dominating at the net.

"It was a really tough game," Stoyanovskiy said.

"They have changed their coach and play differently with more spikes on the second ball.

"That was a problem for us in the whole match, especially in the first set.

"We found the key to overcome that and we put more pressure on their service to bring them away from the net, and that was fruitful for us."

ARE YOU TUNING IN?

Since November, they have been training in Tenerife, Sri Lanka and the Russian national training centre in Anapa as they set their sights on the Tokyo 2020 Olympic Games.

The Brazilians firstly defeated Belgium’s Dries Koekelkoren and Tom Van Walle 12-21, 21-14, 15-9 and then rounded off their day’s work by overcoming the United States' Stafford Slick and William Allen 21-15, 21-17.

"Of course, two victories mean it is a good start – it is what everyone is trying to do," Oscar Schmidt said.

The men's only tournament is due to run through to Friday (March 13).

It is the second of nine four-star events on the 2019-2020 calendar and the winners will leave with 800 ranking points.