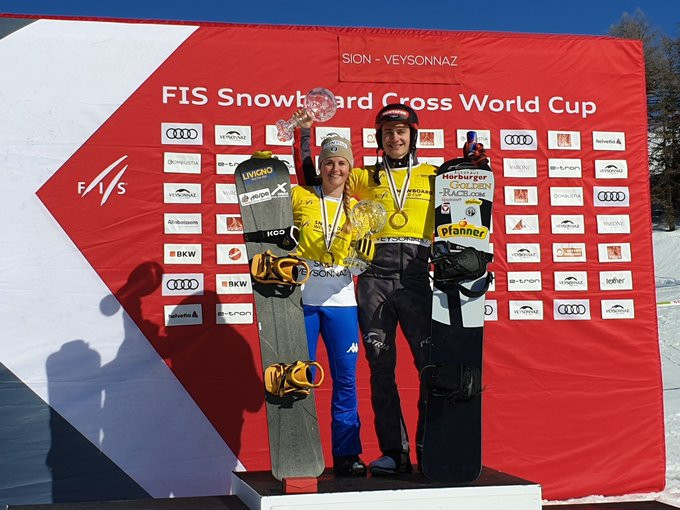 Olympic champion Michela Moioli of Italy and Austrian Alessandro Hämmerle wrapped up the overall women's and men's titles, respectively, with victories at the final International Ski Federation Snowboard Cross World Cup of the season in Switzerland.

Moioli, gold medallist at the 2018 Winter Olympic Games in Pyeongchang, won the women's big final in Veysonnaz to secure a third overall crown.

The Italian star finished ahead of France's Chloe Trespeuch, while Belle Brockhoff of Australia - the only athlete who could have snatched the crystal globe from Moioli - was third.

Victory for Moioli saw her end the campaign in top spot on 5,400 points, 1,300 clear of Brockhoff in second.

The 24-year-old Italian also maintained her record of finishing on the podium at every World Cup stop this season.

Hämmerle retained his men's title in style after winning the final race of the campaign.

Omar Visintin of Italy and Australia's Adam Dickson were second and third, respectively, while Lorenzo Sommariva of Italy failed with his bid to clinch the overall crown after finishing fourth.

Sommariva trailed Hämmerle by 10 points going into the season finale but could not find a way past the Austrian, who took the title on 3,960 points.

The Italian ended 510 points behind in second, with Visintin third on 2,930 points.

The Snowboard Cross World Cup final proved to be the last major event of the FIS season after the cancellation of events in other disciplines because of the coronavirus pandemic.