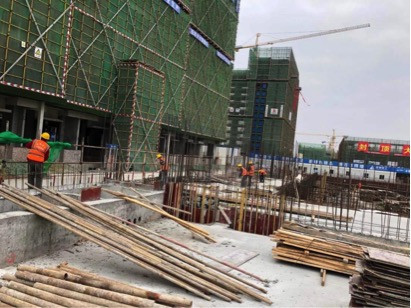 Organisers of next year's International University Sports Federation (FISU) Summer World University Games in Chengdu have claimed the Athletes' Village is on track to be completed by the end of the year.

Peng Gang, project manager of the Village, said more workers would be enlisted to ensure the facility is finished on time.

Construction work has resumed following the Chinese New Year period, which coincided with the outbreak of the COVID-19 virus.

"We will further optimise our construction plan and increase the number of workers on the site to complete the whole project by the end of this year," said Peng.

The project manager of the Village, set to house over 11,000 people during Chengdu 2021, said the medical centres and training halls were 80 per cent complete.

The athletes' apartment and international education centre have already been finished, while work on the swimming pool complex and gymnasiums is underway.

"Holding the World University Games will enhance the international reputation of Chengdu as a modern and international city," said Peng.

"We will impress the world with our charming Chengdu culture.

"As a core part of the Games, the construction of the Village is of vital importance.

"We will provide a safe and comfortable environment for athletes and other delegates.

"Staying here will be an enjoyable experience for all."

Chengdu was confirmed as the host for 2021 in March of last year.

Organisers had entered a "pre-attribution contract" with FISU in December 2018 and the city was the sole bidder.

The event will be the first to be called the Summer World University Games after FISU ended the use of Summer Universiade.

Chengdu is also hosting the World Games in 2025.