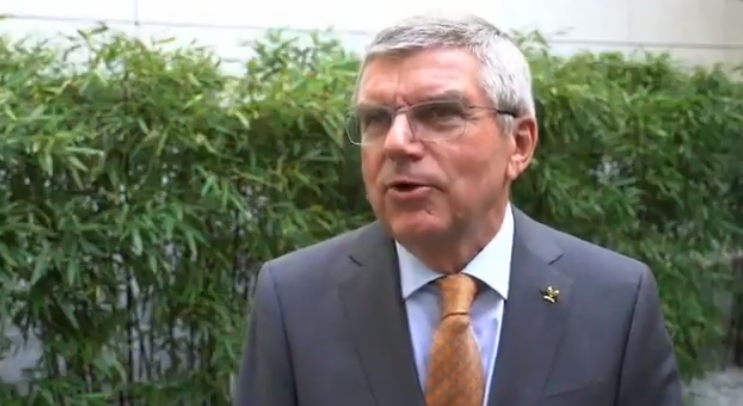 Pinsent made the comment on Twitter in response to an in-house interview shown by the IOC with Bach yesterday.

It followed a conference call with athlete representatives regarding Tokyo 2020, and amid uncertainty over whether the Games will begin on July 24 due to COVID-19.

"We have just had a really great call with 220 athlete representatives from all around the world, it was very constructive and gave us a lot of insight," Bach said.

"We aimed to continue being very realistic in our analysis.

"We were confronted with many concerns about the qualification system and the restrictions being in place now.

"We were also very constructive in consideration of the way to Tokyo.

In response to the video, Pinsent tweeted: "I'm sorry Mr Bach but this is tone deaf.

"The instinct to keep safe (not to mention obey Government instructions to lock down) is not compatible with athlete training, travel and focus that a looming Olympics demands of athletes, spectators, organisers etc.

"Keep them safe. Call it off."

I’m sorry Mr Bach but this is tone deaf. The instinct to keep safe (not to mention obey govt instructions to lock down) is not compatible with athlete training, travel and focus that a looming Olympics demands of athletes, spectators organisers etc Keep them safe. Call it off. https://t.co/nKnEEiVku1

Pinsent is just the latest voice to call for the Games not to go ahead.

The coronavirus has had a considerable impact on the sporting calendar, with numerous qualification events for the Olympic Games either postponed or cancelled.

Concerns have been raised over athletes being unable to train for the Games, as several countries have been locked down by Governments to curb the spread of the virus.

Pinsent, a former member of the IOC Athletes' Commission, expanded on his Twitter post in an interview with BBC Radio 4's Today Programme.

"I think that is really unfortunate messaging at this stage, I think there are bigger things to worry about at this stage on a global front," he said.

"We have other priorities.

"I think the Olympics should at the very least be saying we should postpone or cancel at this stage and we will talk about postponement later on.

"I just don't think there is much of a choice at this stage.

"For many of the European and Asian countries, organised sport in any meaningful way has ceased under Government advice.

"I do not see there is a way forward for an Olympic athlete to train as an individual, but particularly in a team environment.

"Obviously I came from rowing, and rowing squads around Europe and the world are essentially downing tools and going into lockdown as their individual Governments are mandating that they should – I just think it's unfair.

"It's unfair for the Olympics to say we're going to carry on.

"There are the two big forces in an Olympic athlete's life, which is the Olympics and everything else.

"And those two things are pulling in different directions at this moment."

IOC Athletes' Commission member Hayley Wickenheiser earlier this week claimed the IOC's insistence the Olympics will go ahead as planned was "irresponsible".

The IOC have said there is no need for "any drastic decisions at this stage" in relation to Tokyo 2020.

The coronavirus pandemic has seen more than 220,000 cases reported worldwide, with close to 9,000 confirmed deaths.