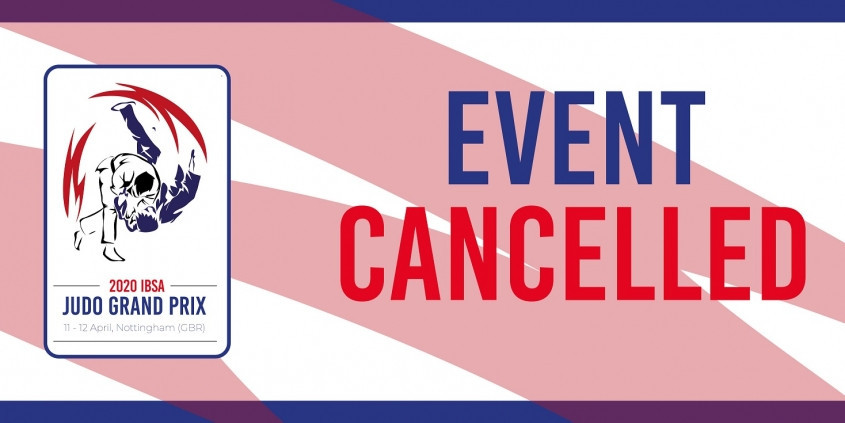 Next month’s International Blind Sports Federation (IBSA) Judo Grand Prix in Nottingham has been cancelled in response to the British Government’s attempts to delay the spread of coronavirus.

The decision to call off the event, which had been due to take place at the University of Nottingham on April 11 and 12, was announced by IBSA and British Judo.

"British Judo have been in regular contact with the British Olympic Association, UK Sport and Public Health England over the past couple of weeks regarding the recent outbreak of COVID-19 across the world," Andrew Scoular, chief executive of the British Judo Association, said.

"When hosting major events, the safety and well-being of everyone involved in the event, including athletes, officials, spectators, volunteers and staff is the absolute priority.

"Based on the UK’s plan to contain and delay the spread of COVID-19, we have received updated advice from the UK Government with respect to hosting major sport events.

"It is with great regret that the Local Organising Committee, in conjunction with IBSA, has agreed to cancel this event.

"We are extremely disappointed for the athletes, who we know have been training hard and were looking forward to competing in this event, in Nottingham, and for the staff and volunteers who have been working tirelessly over the last 18 months to deliver an outstanding event.

"However, we believe in the current situation this is the only responsible course of action to take."

The IBSA Judo Grand Prix, scheduled for 11-12 April in Nottingham, Great Britain, has been cancelled.

Read more about the decision, and how the sport will move forward 👉 https://t.co/DKX3juqzQC pic.twitter.com/gdsWaqXNbX

The IBSA Judo Grand Prix in Nottingham was the penultimate qualifier for this year’s Paralympic Games in Tokyo.

All ticket holders are set to receive a full refund.

"Since the coronavirus was announced as a global health emergency by the World Health Organization, we have been monitoring our competition calendar closely and working with Local Organising Committees on the advice they are receiving from national health authorities," Henk van Aller, IBSA’s executive director, said.

"We are very disappointed to have to cancel the Grand Prix in Nottingham, but fully support British Judo and the University of Nottingham in their desire to take responsible action.

"We are incredibly grateful to everyone who has been working to make this event happen and have no doubt it would have been a great competition in the lead-up to the Tokyo 2020 Paralympics.

"We will now be reviewing the qualification pathway for Tokyo 2020 in light of the changes and will ensure everyone is kept informed as we move forward."

Another IBSA Judo Grand Prix in Azerbaijan's capital Baku is scheduled for May 11 and 12.

IBSA says it is currently reviewing the viability of the event and will keep stakeholders informed.