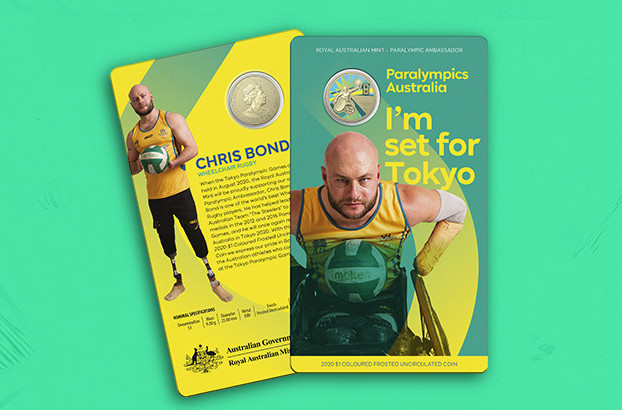 The Royal Australian Mint has released their new Australian Paralympic collectable coins ahead of the Tokyo 2020 Paralympics, set to take place in August 2021.

Those coins will feature cards with Paralympic stars from the nation including wheelchair rugby player Chris Bond who won Paralympic gold at both London 2012 and Rio 2016.

As a partner of the Australian Olympic team, the Mint have also produced a 50 cent coin that has to feature the new sports of the 2021 Games with those being karate, sport climbing, surfing, skateboarding and baseball and softball.

"With the release of the official Australian Team coins, the Mint provides lasting tributes to the grit, determination and perseverance that is embedded in each Australian athlete embarking on their renewed journey towards the Paralympic and Olympic Games in 2021," said Royal Australian Mint chief executive officer Ross MacDiarmid.

"The Mint is excited to release these coin programmes in the lead-up to the Games, and we will be working hard to create tangible mementos which embody our nation's affiliation with and love of sport.

We are proud to share the launch of the Australian Paralympic Team Coin with the @RoyalAustMint. The 2020 $1 Coloured Frosted Uncirculated Coin features Wheelchair rugby Paralympian, Chris Bond.

"We hope Australians will treasure these high-quality coins for years to come, as a reminder of the sense of pride and achievement we felt in our athletes."

Paralympics Australia chief executive officer Lynne Anderson expressed her support when she said, "In a time of uncertainty and significant change for all, we are very proud and humbled to share the launch of the Australian Paralympic Team coin with the Royal Australian Mint.

"We are really proud of our ongoing partnership with the Royal Australian Mint and we're looking forward to adding this to our collection of special edition Australian Paralympic coins.