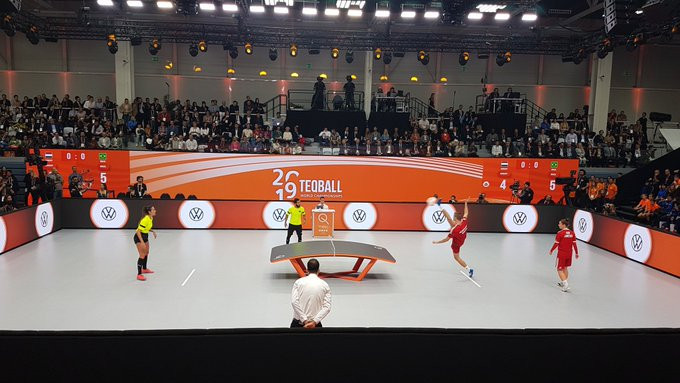 The International Teqball Federation (FITEQ) said it was "honoured" to have teqball included as a demonstration sport at the 2021 Asian Indoor and Martial Arts Games.

It was announced earlier this week that teqball would be one of two demonstration sports at the Games in Bangkok and Pattaya, along with air sports – indoor drone.

A further 28 medal sports were also scheduled for the Games which is due to take place between May 21 and 30 in 2021.

FITEQ general secretary Marius Vizer Jr revealed his delight at the inclusion of teqball in yet another multi-sport event.

"We are delighted with the news that teqball will be a demonstration sport in the Asian Indoor and Martial Arts Games in 2021 and are grateful to the Olympic Council of Asia (OCA) and the National Olympic Committee of Thailand for the opportunity to be a part of this prestigious event," he said.

"This will serve as another important milestone in the teqball journey in Asia, following the sport’s debut as a medal sport in the Sanya Asian Beach Games in December this year."

FITEQ was officially recognised by the OCA at the continental governing body’s General Assembly in Jakarta in August 2018.

"We are a young, ambitious sport that is growing in all five continents and we are working hard to bring teqball to people all over the world," Vizer Jr said.

"OCA President Sheikh Ahmad Al-Fahad Al-Sabah has been very supportive of FITEQ from the start and we hope to repay him and the OCA Executive Board by bringing a new, youthful audience to the Games in 2021 and help the OCA inspire a more active Asia."