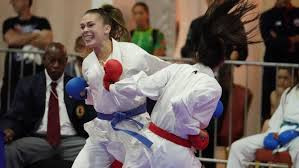 Canadian karateka Kate Campbell has said she sees the postponement of the Tokyo 2020 Olympic Games as an advantage and welcomed the additional preparation time resulting from the one-year delay to the event.

Karate is due to make its Olympic debut at Tokyo 2020, which has been pushed back to 2021 because of the coronavirus pandemic.

Athletes in the sport have been forced to wait an extra year to compete at the Games but Campbell, a double Pan American Games silver medallist, is taking the positives.

"An extra six months of preparation in the big scheme of things is just an advantage in my eyes," the 29-year-old told CBC.

"Another year really is not a big deal when I look at the big picture.

"A medical career could have quite a length to it on the other side of things which is a chapter I look forward to opening but for the time being I'm just not done with this one yet."

Campbell, also a two-time bronze medallist on the Karate 1-Premier League circuit, said there are benefits to the decision not to include the sport on the Olympic programme for Paris 2024.

"It definitely makes it easy to focus on the goal because it is a one shot kind of deal, which makes the COVID stuff and managing training schedules and all that insignificant to the overall goal," she said.

The Tokyo 2020 Olympics have been rescheduled for July 23 to August 8, with karate due to take place between August 5 and 7.