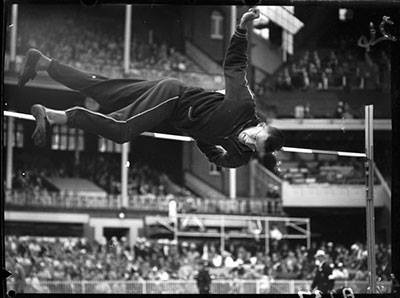 Known as "Chilla", the double Summer Olympian finished second at his home Games after a memorable final at Melbourne Cricket Ground.

Then aged 19, he was one of 22 athletes to clear the qualification height of 1.92 metres to progress to the final, which lasted for more than five hours.

Porter cleared 2.10m as the action finished under the lights in front of 60,000 fans, with only American Charles Dumas able to beat him with 2.12m.

All of the top four finishers broke the previous Olympic record.

As well as his Olympic silver, Porter also won two medals of the same colour at the Commonwealth Games.

Australian Athlete Charles "Chilla" Porter passed away at the age of 84. He represented Australia in the men's High Jump event at the 1956 Melbourne and 1960 Rome Summer Games, winning a Silver medal in Melbourne.https://t.co/Qr5ilEUiz1 pic.twitter.com/S21fNQlqZQ

He competed at the Rome 1960 Olympics after his Melbourne appearance, and won seven national titles.

In 2011, he was inducted into the Athletics Australia Hall of Fame.

"Charles was a great athlete and ambassador for athletics in Australia and abroad," Coates, an International Olympic Committee vice-president, said.

"Winning silver in front of 60 000 fans at a home Games after a marathon high jump competition stretching past sunset is etched into Australian Olympic folklore.

"My thoughts go to Charles' family, friends and the Australian athletic community."