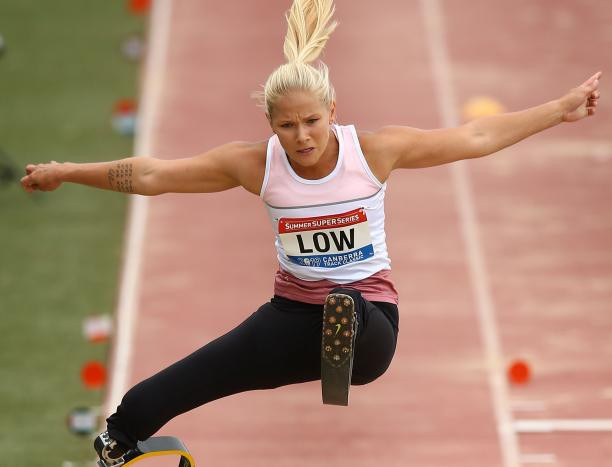 Paralympics Australia has named the first 10 members of its team for the Tokyo 2020 Paralympics, with the headline name Rio 2016 long jump champion and former German national Vanessa Low.

The group for the Games in Japan next year all comes from athletics and includes world champions and three set to make their Games debuts.

Mainstays in the team include wheelchair racer Madison de Rozario and amputee middle-distance runner Michael Roeger, who have both competed in three Paralympic Games.

Low comes into the team after winning the long jump T61-63 at the World Championships in Dubai last year.

She had previously won a gold and silver medal at the Rio 2016 Paralympic Games before moving to Australia.

Eliza Ault-Connell competed in five events at the Athens 2004 Paralympics, but stepped away from the sport to start a family.

Now, the 38-year-old will return to the Paralympics 17 years later having won a bronze medal in the 800 metres T54 at last year's World Championships.

Paralympic wheelchair racing legend Kurt Fearnley will be cheering on his former training partner, Rheed McCracken, who will return for a third Games.

Congratulations to the first 10 @athleticsaustralia athletes selected to the Australian Paralympic Team for @Tokyo2020 @Paralympics, in 2021.

"We're thrilled to announce some of the athletes who've worked so hard for this selection over four years or more," said Paralympics Australia's chief executive Lynne Anderson.

"On top of our year-to-go announcement and the launch of our uniform for Tokyo recently, it's yet another boost to say 'keep going, the finish line is in sight'.

"It's a stellar group we've named and they set a really high standard for the rest of the Australian team announcements we'll be making in due course.

"The message is clear: we're in full swing for Tokyo and we'll be aiming to win."

"They've always been one of the bigger teams and always been quite successful, but I think what we're seeing now is a maturity coming through in the next batch.

"The baton has well and truly been passed and the next generation is building momentum.

"Being able to announce this mix of experienced Paralympians, with so many medals between them, along with some exciting newcomers is a really important moment for us.

"These athletes have certainly earned their spots – they've achieved an automatic qualification through their results at the 2019 World Para Athletics Championships."