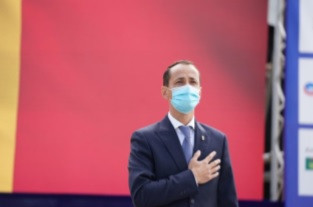 Former Olympic and world fencing champion Mihai Covaliu has been re-elected President of the Romanian Olympic and Sports Committee (COSR).

Covaliu, who won the gold medal in the sabre event at the 2000 Olympic Games in Sydney, secured a second four-year term after standing unopposed at the ROSC General Assembly in Bucharest.

The gathering of the ROSC membership was held at an outdoor venue, the Olympic Training Centre in Izvorani, due to the coronavirus pandemic.

Covaliu, who succeeded former Romanian national rugby team captain Alin Petrache in 2016, presented his strategy for his next mandate during the assembly.

The 42-year-old said the main principles for his second term are trust, solidarity, respect and excellence.

Covaliu is set to serve in the position through to the 2024 Olympic and Paralympic Games in Paris.

Romania won a total of four medals, including one gold, at Rio 2016, a performance which led to Petrache quitting as ROSC President.

The country had initially claimed five medals but weightlifter Gabriel Sîncrăian was stripped of his bronze medal after testing positive for exogenous testosterone during the Games.