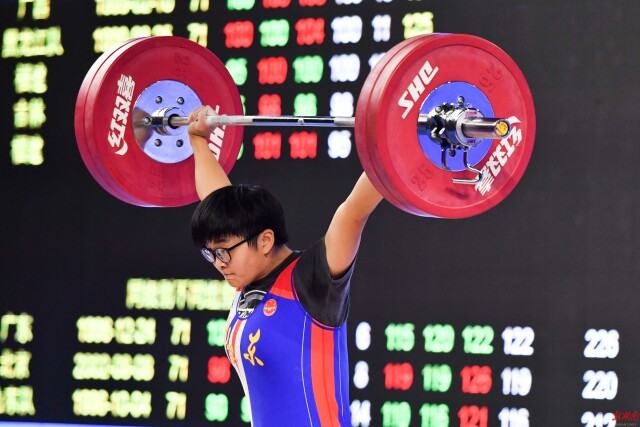 China has demonstrated once more the remarkable strength in depth of its elite weightlifters.

After 10 months without live action because of the COVID-19 pandemic, 207 athletes from 31 teams across China competed in Shaoyang in the National Women’s Championships.

There were three lifts that would have made world records had they been achieved in international competition, two of them by a teenager who has never yet made the national team.

Three of China’s best performers who stand at or near the top of the Olympic points rankings were beaten - two of them world record holders.

There were 47 national records set in a competition that was broadcast to the nation on China Central Television.

The super-heavyweight Li Wenwen made an impressive total of 329 kilograms to finish 47kg clear of her nearest rival, and Wang Zhouyu was an easy winner at 87kg.

Li’s clean and jerk of 187kg was 1kg better than her own world record, and exactly what she wanted to honour the memory of her late grandfather.

He passed away about a month ago and Li decided she had to win and make a record to dedicate to him.

Wang’s total of 286kg may not count towards qualifying but it shows how strong a favourite she is for Tokyo, as it is 17kg better than any of her Olympic rivals.

In the lighter categories there were surprises.

"Some athletes did not satisfy themselves with their best performances due to too much pressure to pursue a better result," said Meng Bo, deputy director of the Chinese Weightlifting Association.

The world record holders who lost were Hou Zhihui in the 49kg, where she was 1kg behind Liu Feng, and Li Yajun who was only fifth in the 55kg, trailing 10kg behind Yu Linglong.

Chen Guiming was second to Luo Shinfang in the 59kg, coming up 15kg short of her best effort in Olympic qualifying.

Between them these three failed with eight of their attempts.

Deng Wei, one of the strongest gold medal favourites for Tokyo, also failed with half her attempts, though she won the 64kg category as expected with 113-138-251.

Peng Cuiting, a 19-year-old who broke national junior records last year, made a snatch of 123kg in the non-Olympic 71kg category - which would have been a world record by 6kg if she had done it in an international competition.

She also surpassed the world mark with her second snatch of 120kg.

Peng is based in Shilong in Guangdong Province, the hometown of China’s first great weightlifting hero Chen Jingkai.

Chen, who died in 2010, was the first Chinese athlete to break a world record in any sport.

He did it in 1956 in a match between China and the Soviet Union, beating the 56kg clean and jerk mark.

China’s men compete in their own National Championships over the next few days.