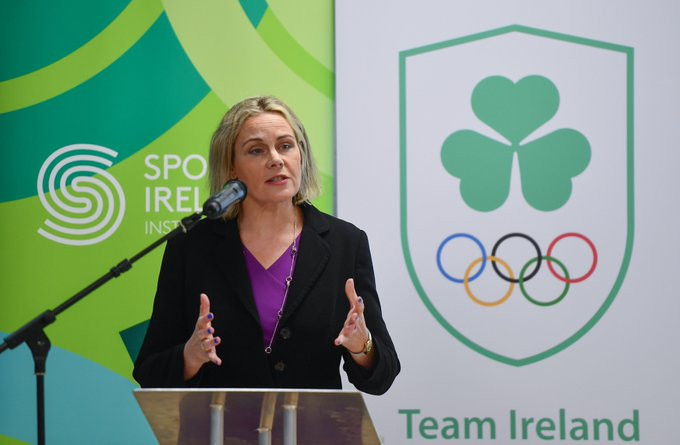 Sarah Keane is set to remain as President of the Olympic Federation of Ireland (OFI) after it was confirmed she would stand unopposed at next month's election.

History was made in February 2017 when Keane became the first female President of the OFI and she is now poised to stay in charge until 2024.

Keane replaced Pat Hickey, who held the role for 27 years before standing down following his arrest during Rio 2016.

Hickey faced charges of theft, tax evasion, money-laundering and criminal association after hundreds of tickets to Olympic events at Rio 2016 were seized by police.

The former President of the European Olympic Committees denied any wrongdoing.

The OFI, which was previously known as the Olympic Council of Ireland until 2018, said Hickey would not be welcomed back into the organisation.

Keane is set to be re-elected for a second term at the OFI Extraordinary General Meeting which is scheduled to take place on December 8.

But Keane, who is the chief executive of Swim Ireland and has been tipped to become the new head of Football Association of Ireland, revealed she would not be standing for a third successive term.

"I'm honoured to be uncontested to remain on in the position of President with the Olympic Federation of Ireland for the next Olympic cycle," said Keane, according to the Irish Times.

"For lots of reasons this has been an unusual cycle, and whilst a significant amount has been done and achieved, there is more to do, and we are very ambitious for Team Ireland and Irish Olympic sport.

"We will have a good level of turnover on the Board, but it is good also that we have continuity.

"After this, my term limit is up - and this is also important as it will ensure that others have an opportunity to bring something new and different to the role and the organisation."

Honorary treasurer Billy Kennedy is expected to be among four Executive Committee members to stand down including Darren O'Neill, Denis Toomey and Rob Johnson.

According to the OFI, the honorary treasurer officer position will be phased out.

In September, the OFI passed a motion that ensures a minimum of 40 per cent of either men or women must be on its Board.