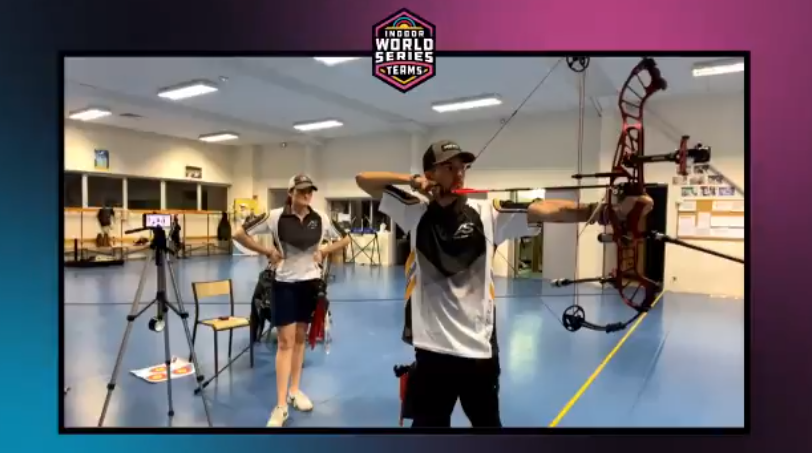 The French trio were competing from a national training facility in Dijon, represented by Nicolas Girard, silver medallist at the Nimes Archery Tournament in 2020, up-and-coming Adrien Gontier, the captain, and student archer Lola Grandjean, who is making the transition to the senior ranks at the age of 20.

And it was Girard who fired the final decisive arrows, matching the maximum 12 shot by Team Easton’s Reo Wilde, three-time World Archery indoor champion, to tie the scores at 121-121 before outscoring Kris Schaff, currently ranked third in the world, with the final shot of the competition.

Team Easton - who also had Linda Ochoa-Anderson in their line-up - had reached the final after a tight semi-final against The Hotshots, made up of Brielle Ochnich, Sawyer Sullivan and Cole Zeug - all junior archers from the United States.

Sullivan and Zeug were members of the gold medal-winning compound cadet men’s team at the 2019 World Archery Youth Championships in Madrid.

Ochnich, 14, was making her debut at this level of competition.

Hotshots were level at 89-89 with Team Easton with just one end to go.

The first semi-final was even tighter, with Arc Système defeating the Estonian national team 127-125.

They qualified with a top score of 1,781 points during the January stage of the indoor circuit and will shoot this weekend’s event from the National Training Centre in Chula Vista in California.

Lancaster are joined in the recurve final four by The Golden Arrow, The Netherlands and Beiter.