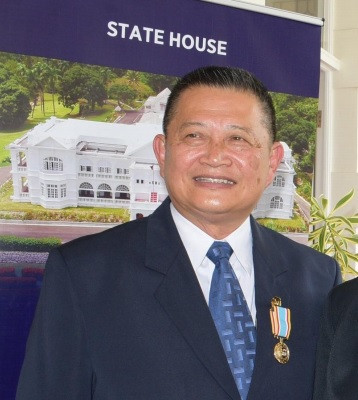 The Fijian official, known fondly as Chris, served as the country’s Chef de Mission at the 2012 Olympics in London, as well as the Commonwealth Games at Melbourne 2006, Delhi 2010 and Glasgow 2014.

During his time at Weightlifting Fiji, Chris was secretary general for 14 years and held a number of other positions including Executive Board Member, vice-president, team manager and chair of the national selectors.

Chris is said to have played a key role in Fiji’s weightlifting success on the international stage which included a top-five finish at London 2012 and gold medal joy at the Commonwealth Championships in 2015, 2016 and 2017.

Weightlifting Fiji said it was "deeply saddened" by the loss of Chris who died from coronavirus last Wednesday (July 7).

"Since 2002, Chris has been the common denominator and a driving force for Weightlifting Fiji, the success of Fiji’s elite performances and the development of the sport," a statement from Weightlifting Fiji read.

"Chris’s personal mentoring and support for our high-performance athletes has seen Weightlifting Fiji excel in the regional and international scene.

"He has been instrumental in the progress and successes of Fiji elite weightlifters since 2002, including all our Olympians Ivy Shaw, Josefa Vueti, Manueli Tulo, Maria Liku, and Apolonia Vavai who have directly benefitted from Chris’s passion and personal interest in them.

"Chris offered good fatherly advice, encouragement, and inspiration to all the lifters, and even providing employment, accommodation and financial support.

"His greatest trait was his personal belief in the capabilities of the individual athletes.

"He topped that up by having a regular face-to-face personal mentoring and review meetings with the athletes, drawing short-term and long-term plans and measuring their progress against set benchmarks."

Chris was also organising secretary for the 2019 Junior World Championships in 2019 as well, as the 2010 and 2016 Oceania Championships, all held in Fiji.

Weightlifting Fiji said the success of these tournament can be attributed to the "passion" and "dedication" of Chris.

"He is known to make himself late into the night to ensure that everything is well planned and executed," the statement added.

"Chris was the catalyst who worked diligently and sacrificed tremendously, to help build Weightlifting Fiji, into a powerful and highly recognised organisation."

Chris was made a life member of Weightlifting Fiji in 2013 in recognition for his long service to the sport.

He continued to serve on the Executive Board after a two-year break and stood down in 2020.

As well as his work with Weightlifting Fiji, Chris had three terms on the Fiji Association of Sports and National Olympic Committee (FASANOC) Executive Board as vice-president for finance from 2007 to 2013.

The FASANOC awarded Chris with its Olympic Order in 2014 in recognition for his dedication and distinguished record of service to sport in Fiji.

Chris was also recognised by the Fijian Government in 2020 for his contributions to the country when he was awarded the Fiji 50th Anniversary of Independence Medal.