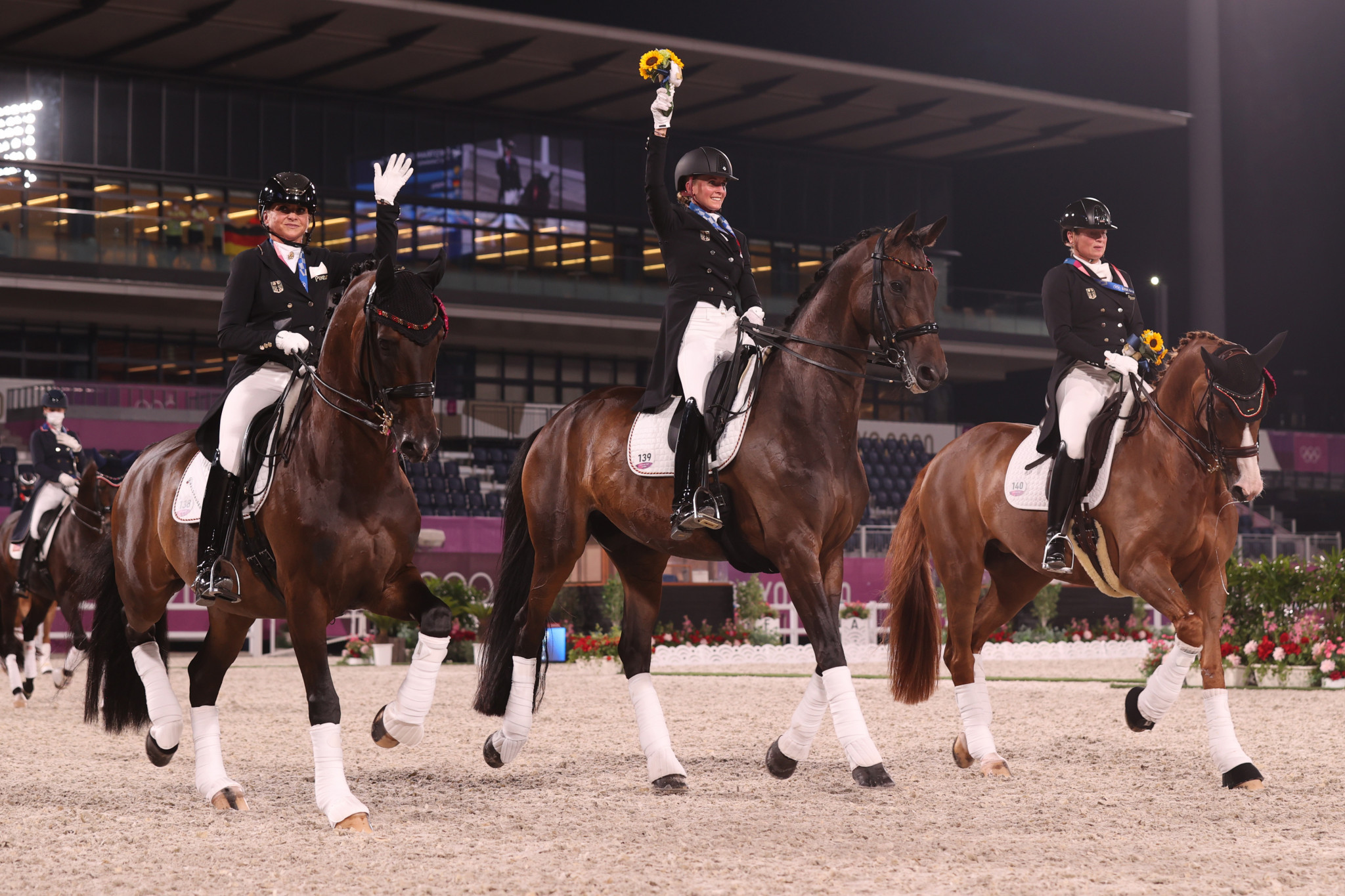 Germany’s experience was the decisive factor in retaining the Olympic team dressage title, yet it fell to debutant Jessica von Bredow-Werndl to perform the test which clinched gold on TSF Dalera.

They were the last into the arena and needed to beat the score achieved by United States rider Sabine Schut-Kery to win gold after Charlotte Dujardin had been unable to send Britain into top position.

Von Bredow-Werndl did more than that, setting an Olympic record to earn the Germans an empathic win.

"All in all, it was beautiful to ride her," Von Bredow-Werndl said of her horse.

"She's always giving her very best for me, and she was so focused.

Von Bredow-Werndl aded she was "just very grateful that I didn't need to make a personal best or something like that to win gold".

Her horse was called Showtime FRH and it was certainly true that the Germans responded to the biggest stage of all better than their rivals.

"With the first ride you have, every time, pressure, but I feel it positive because I feel the horse is in a good shape, very motivated but not intense," Schneider said.

"We try to do our best and I think he did an amazing job this day, and I'm very happy with it.

"But I come back and cross my fingers for the other ones."

Five-time team gold medallist Isabell Werth, on Bella Rose 2, maintained the pressure on rivals with another excellent round.

The Germans finished with three of the top four individual scores, and Von Bredow-Werndl's percentage total of 84.666 is a new Olympic record.

Nine of the last 10 Olympic team dressage tiles have gone to Germany.

Britain were led off by Carl Hester, a gold medallist from 2012, and occupied the silver-medal position for the first two rounds.

Olympic debutant Charlotte Fry maintained it, but Schut-Kery’s ride in the last round saw US leapfrog Britain into silver.

"It was quite intense to wait that long," said Schut-Kery said, whose individual total was bettered only by Werth and Von Bredow-Werndl.

"I was filled with joy and pride but it is such a team effort, it was a big relief to deliver for the whole team."

"Sabine’s horse had a fantastic test but we all knew one mistake might put us in the bronze medal or not even in the medal position."

Since Rio 2016, Dujardin's famous horse Valegro had retired and she has partnered Gio Pumpkin.

"I just went in there to do the best I could," Dujardin said.

"I was absolutely thrilled with Pumpkin.

"He is only 10 years old with not a lot of experience at all.

"This last few days, he’s literally tried his heart out.

"I can’t really ask much more.