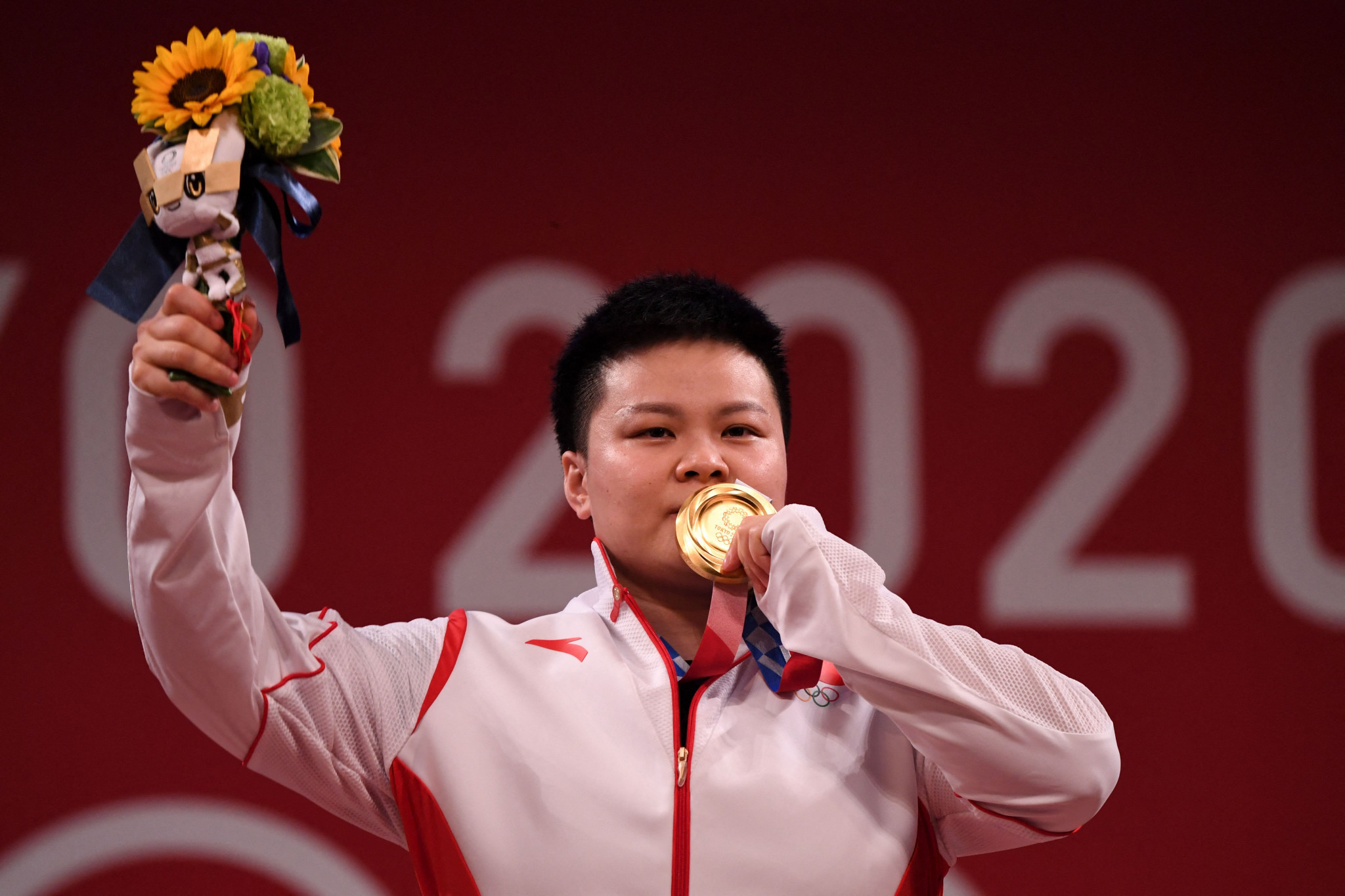 After winning five weightlifting gold medals at every Olympic Games this century, China went one better with a sixth at the Tokyo 2020 Games when Wang Zhouyu took the women’s 87 kilograms gold today.

China later made it seven golds when Li Wenwen finished way ahead of her rivals in the final women's contest of the Games, the +87 super-heavyweights.

Wang, 27, is now unbeaten in six international competitions in a weight category that is far less competitive than some of the others.

Her victory in the penultimate women’s contest was never seriously in doubt after she made her opening clean and jerk of 145kg in the Tokyo International Forum.

There was a real tussle for the silver and bronze medals, with Tamara Salazar, the only six-from-six lifter, second on 263kg, behind Wang by 7kg.

It meant that Ecuador, which had waited until its twelfth Olympic Games before a woman won a medal in any sport, had two in two days after Neisi Dajomes’ gold at 76kg yesterday.

Crismery Santana took the bronze for the Dominican Republic, which has also won two weightlifting medals at Tokyo 2020 after Zacarias Bonnat’s silver in the men’s 81kg.

There were tears when Ankhtsetseg Munkhjantsan just failed with her final attempt at 147kg, which would have given Mongolia its first Olympic weightlifting medal.

Munkhjantsan, 23, who was beaten only by two Chinese lifters at the Asian Championships in April, had four no-lifts and finished fourth.

Gaelle Nayo-Ketchanke of France was a highly creditable fifth, making five of her six attempts.

When Nayo-Ketchanke broke her arm in two places at the European Championships two years ago, it seemed her career was over, but she recovered well and achieved her best total at the age of 33, improving on her eighth place at Rio 2016 in the old 75kg category.

Lidia Valentin of Spain, who won gold, silver and bronze at her previous three Olympic Games, found herself in the B Group in her first competitive appearance at this weight and made 225kg for 10th place at the age of 36.

Mattie Rogers of the United States, clearly upset when a tight decision went against her with a jury overrule in the snatch, finished sixth on 246kg.

Rogers said she had been "struggling with my anxiety" over the weekend.

"I think it’s just all caught up to me a little bit," she said.

"That last lift (snatch) getting overturned just set it into a spiral.

"I think had I made that I would’ve had a better shot to fight for a medal.

"I think it would’ve been a very different day had that lift not gotten overturned.

"I thought I was prepared for it. Watching the 76kg class, which is my actual class, my bodyweight is 77kg, was a gut-punch because I felt like that’s where I really belonged and I wanted to see where I stacked up against people my own size.

"But that’s not an excuse to not do great in any weight class.

Valentin weighed in more than 6kg below the 87kg limit and Rogers nearly 8.5kg lighter – but the Korean B Group winner, Kang Yeoun-Hee, weighed even less at 76.7kg.

This weight class was adopted by the International Weightlifting Federation (IWF) board in 2018 against the recommendations of a commission set up to propose new categories.

It is the only Olympic weight class in which no athlete has met the world standard – precursor to a world record in a newly created category – in snatch, clean and jerk or total.

Eileen Cikamatana, the Fijian who switched nationality to Australia and was ineligible for qualifying, made 266kg as a teenager in 2019 and would have been a strong gold medal contender in Tokyo.

There is unlikely to be a women’s 87kg class again if the sport survives on the Olympic programme, as the number of medal events will be cut.