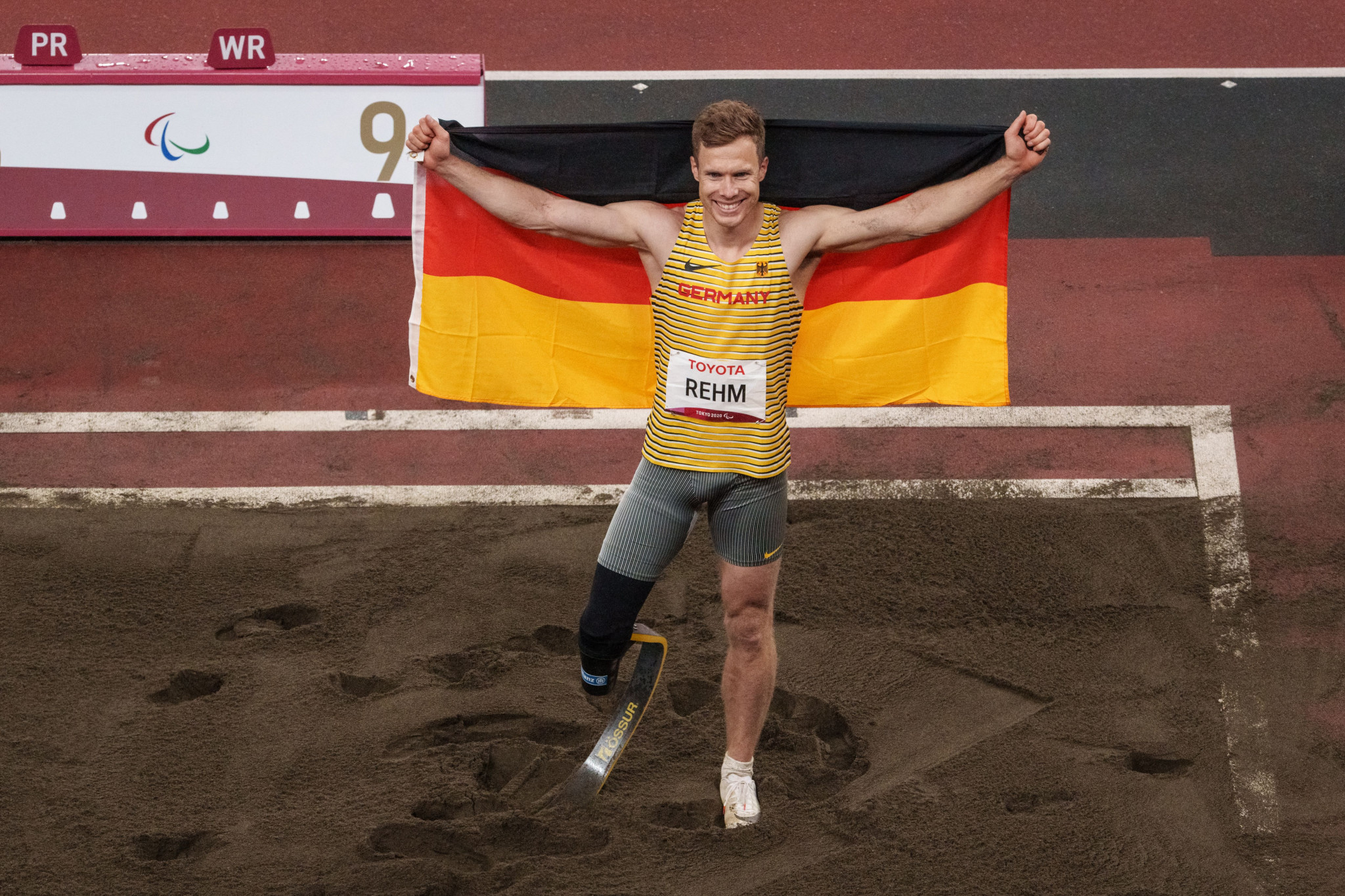 Germany's Markus Rehm claimed gold for a third time with a victory in the men's T64 long jump final on the sixth day of athletics competition at the Tokyo 2020 Paralympic Games.

He had a best effort of 8.18 metres to finish far ahead of the silver medallist, Dimitri Pavade of France, who set a personal best of 7.39m.

Thailand won two golds in quick succession on the track, with Pongsakorn Paeyo first breaking the Paralympic record in the men's T53 100 metres, crossing the line in 14.20sec.

It is a tenth short of Brent Lakatos' world record from 2017, and the Canadian could not replicate that time tonight and finished with the silver medal.

Abdulrahman Alqurashi won Saudi Arabia its first medal of the Games with bronze.

Leo Pekka Tahti of Finland was close behind for silver, as was bronze medallist Juan Pablo Cervantes Garcia of Mexico.

The United States' Nick Mayhugh set a new North American record in second with a best of 50.26, losing to the man he defeated in that 100m final.

Elena Ivanova of the RPC claimed silver, marginally ahead of New Zealand's Danielle Aitchison, who were separated by two hundredths of a second.

In one of the closest races on the track so far - Zhou Zhaoqian of China won the women's T54 100m in a time of 15.90, beating Finland's Amanda Kotaja by three hundredths of a second.

Cheri Madsen of the United States was the bronze medallist, a few tenths of a second back.

Britain's Sammi Kinghorn won her first Paralympic medal with bronze in the race.

In the men's T38 long jump, China's Zhu Dening broke the world record with a best of 7.31 metres leading a one-two for his country with Zhong Hunghao taking the silver, half a metre back.

Canada won its second gold medal of the Games, courtesy of Greg Stewart who threw a best of 16.75m in the men's F46 shot put to claim gold and the Paralympic record.

And another gold medal for Canada! Congrats to Greg Stewart on the incredible win in the Men’s F46 shot put. https://t.co/ShkogLVFgK

He was five centimetres short of Joshua Cinnamo's record, with the American only finishing third.

Between them, Nikita Prokhorov of the RPC claimed silver.

The second round throw from the RPC's Galina Lipatnikova gave her a personal best of 11.03m and a gold medal in the women's F36 shot put.

Miriam Martinez Rico of Spain took silver and Wu Qing of China was the bronze medallist.

Anastasiia Moskalenko of Ukraine broke the world record in the women's F32 shot put with a best of 7.61m.

She defeated Poland's Roza Kozakowska, who was within the previous record too, and finished with silver.

Evgeniia Galaktionova of the RPC takes the bronze.

Musa Taimazov of the RPC broke the world record with a best of 35.42m in the men's F51 club throw to win gold.

Zeljko Dimitrijevic of Serbia was only 13 centimetres behind to win silver, and Marian Kureja of Slovakia claimed bronze.

Tunisia's Raoua Tlili broke the world record with a last round effort of 37.91m to win the gold medal in the women's F41 shot put.

Finally, Iran's Saeid Afrooz broke the men's F34 javelin throw world record with a mark of 40.05m, and was joined by Colombians Mauricio Valencia and Diego Fernando Meneses Medina on the podium.