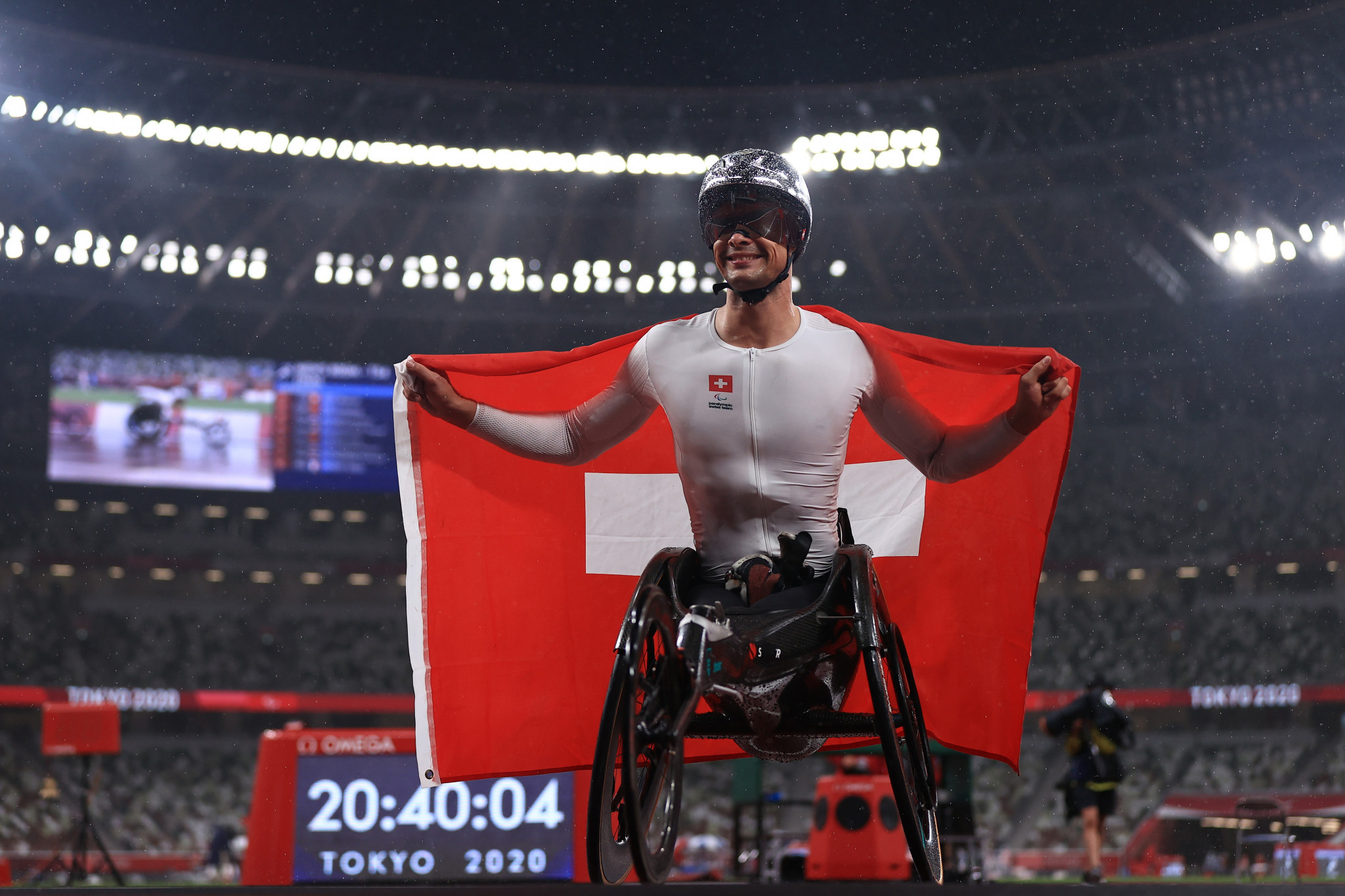 Marcel Hug claimed his third title at this year's Paralympics here in Tokyo as Switzerland enjoyed a golden night on the track at the Olympic Stadium.

The wheelchair racer was part of a thrilling Thursday for his nation which notched three golds in the space of an hour.

The victory completed a memorable hat-trick for both Switzerland and Hug who has also achieved gold-medal success in the men’s 1500m T54 and 5000m T54 in the Japanese capital.

Hug will now be looking to defend his men’s marathon T54 crown as he eyes a fourth gold in Tokyo and the sixth of his career.

"I have so many emotions, it is just incredible what is happening right now," said the 35-year-old.

"I am in a very good shape, everything works so great, mentally as well.

"We have had a great day with two more golds and a bronze.

"We also have a long history in wheelchair racing.

"My wheelchair is performing really well, I feel so comfortable in it.

"I now have two days off so time for a curry, then I’ll try to focus on the marathon."

China's Dai Yunqiang came home in a season's best of 1:34.11 to take silver behind Hug, while Saichon Konjen of Thailand secured bronze in 1:34.19.

Debrunner set the ball rolling for Switzerland when she ended Zhou Hongzhuan's hold on the women's 400m T53 title.

Zhou of China won the event at London 2012 and Rio 2016 but had to settle for bronze on this occasion as Debrunner powered to her first Paralympic title.

Debrunner crossed the finish line in 56.18sec as Britain's Samantha Kinghorn came second in 57.25 and Zhou finished third in 57.29.

Thailand's Pongsakorn Paeyo secured his third gold medal of the Games with victory in the men's 800m T53.

The 24-year-old had already won the 100m and 400m titles and completed the set with a Paralympic record in the 800m.

She produced a season's best of 11.49sec to secure the seventh Paralympic gold of her glittering career.

Ukraine's Oksana Boturchuk also produced a season's best, coming home in 12.03 to seal silver, while the bronze medal went to China's Liang Yanfen who crossed in 12.51.

The Greek racer powered home in 10.82, shaving 0.06sec off his previous best mark which he set yesterday.

Timothée Adolphe of France notched a personal-best time of 10.90 to finish second, while China's Di Dongdong claimed bronze in 11.03.

Jaleen Roberts of the US clinched silver in 13.16 with Jiang Fenfen of China narrowly missing out on second by one hundredth of a second, finishing with bronze.

Noah Malone of the US took silver in 47.93 with Rouay Jebabli of Tunisia close behind for bronze with 48.01.

Algeria also had a day to remember with Skander Djamil Athmani winning the first of three gold medals for the nation after bagging the men's 400m T13 title.

Athmani beat world record-holder Mohamed Amguoun of Morocco for the gold medal, setting a new world best of 46.70 in the process.

Amguoun won silver with 47.70 and Johannes Nambala of Namibia picks up bronze with 48.76.

Asmahane Boudjadar of Algeria has defended her women's F33 shot put title from Rio 2016 successfully, throwing a Paralympic record of 7.10m for gold.

Fouzia El Kassioui of Morocco was close behind with 6.72m and Australian Maria Strong took bronze with 6.63m.

Low's previous best in the T61 category was 5.07m which she set last year and she took two jumps to beat that mark, leaping 5.16m.

She then jumped 5.20m in the fifth round before saving her best until last, reaching 5.28m to cap off a sensational performance to retain her title.

Italy's Martina Caironi came second with 5.14 while Elena Kratter of Switzerland secured bronze with a personal best leap of 5.01m.

Uzbekistan's Khusniddin Norbekov set a personal-best mark of 16.13m to upgrade his bronze from Rio 2016 to win the gold at Tokyo 2020 in the men's F35 shot put.

Jeremy Campbell of the US reclaimed the men's F46 discus crown after winning by more than five metres.

Croatia's Ivan Katanušić was Campbell's biggest challenger but he had to settle for silver with 55.06.

The bronze medal went to Britain's Dan Greaves who reached 53.56.

Five of the Brazilian's six throws were beyond the 40m mark as he broke the Paralympic record after reaching 43.16m, improving his previous best by 10 centimetres.

Anna Luxova of the Czech Republic claimed bronze with 8.60m.