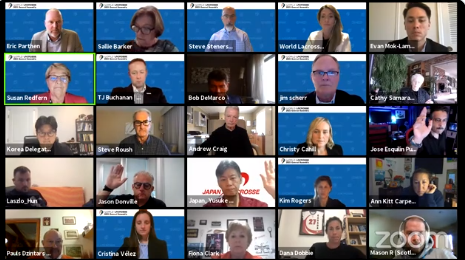 A strategic plan which includes strengthening Olympic ties and adding more member nations has been approved by the World Lacrosse General Assembly.

World Lacrosse reports that more than 100 delegates and observers tuned in for the first half of the General Assembly, which was held online.

Day two is not until October 31.

Approval of the strategic plan and adoption of a World Lacrosse Diversity, Equity and Inclusion Statement headlined the first day of the General Assembly.

The strategic plan's five priorities include strengthening relationships with the Olympic Movement and growing to 85 member federations.

World Lacrosse is hopeful the sport could be added to the programme for the Los Angeles 2028 Olympics, while the new sixes discipline was launched earlier this year with an eye on the Games.

Using 2022 and 2023 events to showcase the sport, diversifying revenue streams and improving World Lacrosse's governance are the other priorities of the strategic plan.

Today, we at World Lacrosse hope you join us in celebrating and honoring Indigenous People’s Day in the US. pic.twitter.com/J1ifnTyTKO

Changes to World Lacrosse membership rules which the Membership Working Group had recommended were approved by the General Assembly, while the organisation's constitution and bylaws were also refreshed, as was the Athletes’ Commission remit.

The Diversity, Equity and Inclusion Statement, following its approval, will be included in its entirety in the World Lacrosse Handbook.

"World Lacrosse is committed to the belief that our world must be inclusive in its diversity, visionary in its approach to equal opportunities in sports participation for all and pioneering in seeking equitable outcomes for all our stakeholders", it begins.

"Through our engagement in the sport of lacrosse internationally and regionally, we must be the voice of diversity, equity and inclusion for our athletes, coaches, staff and volunteers all over the world.

"We accomplish this by engaging in a robust and broad dialogue with our National Governing Bodies, Continental Federations, committees and key organizations and in acting as a role model for diversity, opportunity and inclusion for our members."