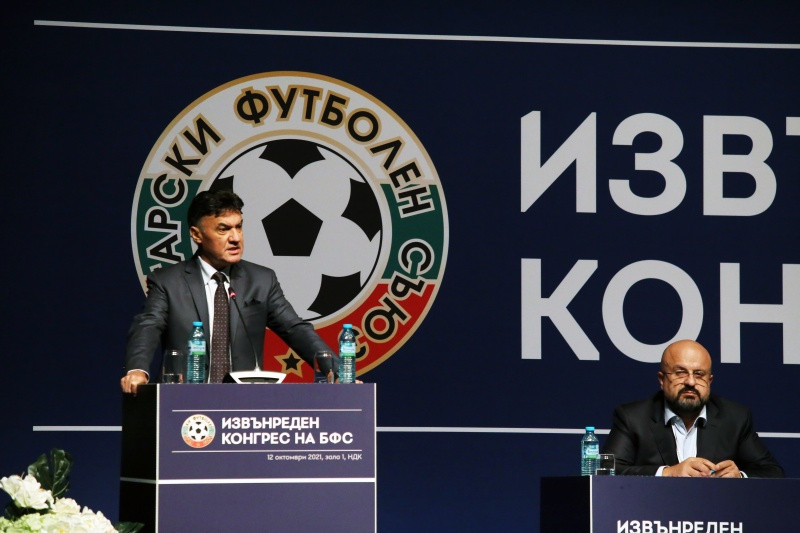 Borislav Mihaylov has been re-elected as President of the Bulgarian Football Union (BFS) after beating a challenge from former Premier League star Dimitar Berbatov.

Mihaylov, captain of the Bulgarian team that finished fourth at the 1994 FIFA World Cup in the United States, retained his position at a meeting in Sofia after polling 230 votes, 11 more than Berbatov.

Berbatov, who played for Tottenham Hotspur, Manchester United and Fulham, had promised radical changes if he had been elected.

Former Reading goalkeeper Mihaylov has been in office for much of the last 16 years.

The 58-year-old resigned the position two years ago in the wake of black England players being racially abused during their 6-0 Euro 2020 qualifying win in Bulgaria.

Mihail Kasabov initially stepped in as a temporary President, before Mihaylov returned to power in April of this year after it emerged his resignation had never been accepted by the BFS Executive Committee.

There have also been allegations of corruption and match-fixing during Mihaylov’s time in charge.

🗣"It’s my duty. I’m a product of Bulgarian football. It’s time for a change.”

"It's time for a radical change - Bulgarian football needs to be fully shaken up," Berbatov had said during the run-up to the election.

"The lack of results, the constant scandals, the suspicions of corruption, the racist incidents in the England game, police entering the FA's headquarters… all this reflects the level Bulgarian football is currently at.

"And it just shows how much this radical change is needed.

"Having said that, I feel ready to take the responsibility for delivering that change."

But a statement on the BFS website read confirmed Berbatov’s defeat.

"Bulgarian football clubs re-elected Borislav Mihaylov as their President for the next four years," it said.

"In front of the eyes of all of Bulgaria and all those present in the hall, the representatives of the clubs gave their support for Mihaylov in the competition of the other five candidates, who publicly assessed the transparency and democracy of the vote."

Mihaylov had been President since 2005 when he replaced long-serving Ivan Slavkov, who was expelled from the International Olympic Committee following allegations of corruption.

It came after BBC's Panorama secretly filmed him claiming he was prepared to vote for London to host the 2012 Olympic and Paralympic Games in exchange for a bribe.

UEFA President Aleksander Čeferin was among the first to congratulate Mihaylov, ignoring the scandal that engulfed Bulgarian football following the racial abuse directed at England's black players at the match in Sofia in October 2019.

The match at the Vasil Levski Stadium was halted twice due to racist abuse.

Afterwards, Čeferin urged the "football family and Governments" to "wage war" on the racists.

But there was no mention of these incidents in the letter Čeferin sent to Mihaylov.

"As you step back into the driving seat, I sincerely wish you all the best for the new term," he wrote in the letter sent to Mihaylov and published on the BFS website.

"Certainly, your genuine love of football and your leadership experience both at the national association on the pitch will, again, allow you to promote and grow football in Bulgaria - and not only in relation to elite performance but for grassroots and youth development, women's football and new infrastructure to further support access and participation."