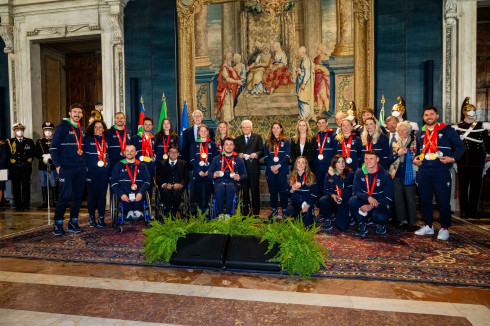 "You have honoured our flag with your commitment and your results," Mattarella said.

"Besides your extraordinary performances, the most important aspect is that the Olympics and Paralympics have kept their unique charm.

"We saw respect and friendship among all the participants, overcoming one's own limits, loyalty and comparison of experiences and methodologies.

"And this is exactly what we need at a time when war represents exactly the opposite of these values.

"Therefore, an invocation for peace is a reference to the principles that animate the Olympics and Paralympics."

"It was an exciting and, in some ways, strange Paralympics," said Bertagnolli.

"Competing was incredible, bringing the flag received from President Mattarella to China a great pride.

"I am also happy with the medals won by my team-mates, which represent a fundamental fact also from a Milan Cortina point of view.

"A Paralympic Games that will be a turning point for our Movement, to demonstrate to Italy and the world what we Paralympic athletes know how to do, not only in terms of sports performance but also in life."

"We won in sports that had never seen us go on the podium," said Malagò, who is also the Milan Cortina 2026 President.

"Between the Tokyo and Beijing Games we are the third country in the world to have won in more disciplines".

Italy is set to stage the next edition of the Winter Olympics and Paralympics at Milan Cortina 2026.