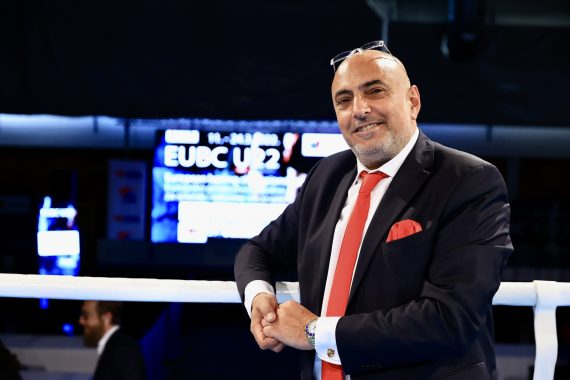 Greece's Ioannis Filippatos has been elected European Boxing Confederation (EUBC) President in a second round of voting at the organisation’s Congress in Assisi.

Filippatos and Dutch official Boris van der Vorst stood for the position, with the pair able to make speeches to outline their proposals during the Congress.

Volodymyr Prodyvus had withdrawn from the election process after outlining the situation facing his nation Ukraine, following Russia's invasion.

Scrutineers deemed the first result to be tied at 23-23, due to one of the votes not being approved by the Commission.

The second vote saw Filippatos secure a 25-22 victory to secure a four-year term as EUBC President.

The EUBC President automatically becomes a member of the International Boxing Association (IBA) Board of Directors, which is set to be cut from 28 to 18 members at the IBA Extraordinary Congress.

Filippatos succeeds the outgoing Franco Falcinelli, with the Italian having led the EUBC for the past 10 years.

The EUBC said Filippatos had pledged to work to solve integrity issues and improve the safety of boxing in his speech.

Filippatos currently chairs the IBA Medical and Anti-Doping Committee, while he previously served as a member of the EUBC Medical Commission from 2013 until 2016.

In his election manifesto, which was titled "Safe Boxing and Fair Boxing", Filippatos vowed to implement "a deep and revolutionary reform of the EUBC Committees" and install "a modern management system" as part of plans covering administration and governance.

Filippatos also hopes to increase the number of boxing competitions held in Europe, including the creation of a Boxing Clubs Champions League, and install an EUBC Club Licensing Programme to help clubs raise their governance standards and aid development.

He has promised the EUBC will provide support to National Federations who are yet to host major competitions with the goal of helping them to do so, and has suggested the continental body could reconsider its tendering process.

Dutch Boxing Federation President van der Vorst was standing in the election a month before he contests IBA Presidential election.

Van der Vorst withdrew his candidacy to the EUBC Board.

Hungary’s Zsuzsanna Toth was automatically elected to the EUBC Board as the sole female candidate standing in the elections.

Bulgaria’s Krasimir Ininski, Monaco’s Andre Micallef, Romania’s Vasile Citea and Aleksander Klemenko of Montenegro succeeded in being elected the Board.

Sweden’s Per-Axel Sjoholm and Azerbaijan’s Vusal Nasirli were unsuccessful in their bids to be elected to the EUBC Board.

Van der Vorst has confirmed his intention to contest the IBA Presidential election.

Van der Vorst was beaten by Russia's Umar Kremlev in the final round of voting in at the AIBA Congress in December 2020.

The organisation has since had a rebrand which included changing IBA's acronym from AIBA and introducing governance reforms.

Kremlev is set to seek a full four-year term as President as expected, with van der Vorst his only rival at the Congress scheduled for May 13 and 14 in Istanbul.

Doubts remain over boxing's long-term place at the Olympics, and elections in Istanbul alongside the Women's World Boxing Championships are likely to be pivotal to its fate.

Boxing has been left off the initial programme for Los Angeles 2028, and the IBA faces a deadline of 2023 to meet certain International Olympic Committee (IOC) criteria in order to salvage the sport's Olympic status.

The IOC in December last year expressed concerns over an IBA sponsorship deal with Russian majority state-owned company Gazprom, arguing it risks being overly dependent on the natural gas giant for its revenue.