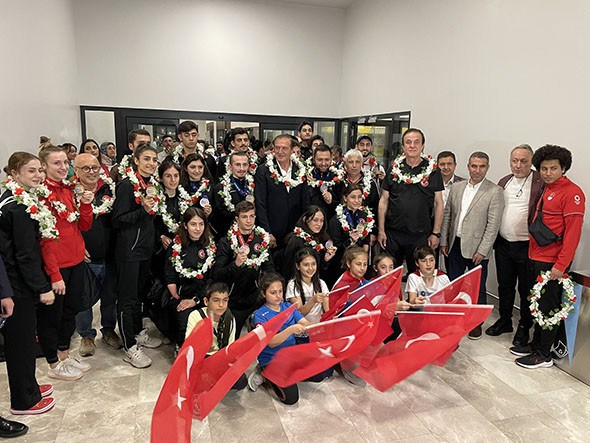 Turkey's heroes from the European Taekwondo Championships were officially welcomed back to the country at Istanbul Airport.

The country topped the medal table at the event in Manchester last week, after proving to be the best team in the men's, women's and Para taekwondo categories.

They won nine gold medals in all, including Hakan Reçber's successful defence of his men's under-63 kilograms title.

Fans, friends and family were among those to greet the team as they returned home.

"It is a great success for us to win three European Championships, in this Championship we went with three teams," said Turkish Taekwondo Federation President Metin Şahin.

"Turkey has become the European champion in women's, men's and Para-taekwondo among nearly 50 countries.

"For the Paris 2024 Olympic Games, this tournament gave huge points.

"We aim to play to the top with the highest participation in 2024 in Paris.

"I would like to thank everyone who supported us.

"There is no success that the youth of this nation cannot achieve."

Turkey's success should be measured against the absence of traditional powerhouse Russia, who were banned due to the invasion of Ukraine.

"We have always been in the top three of the podium," said coach Ali Şahin.

"Our adaptation to the new systems was very fast.

"We had a nice success, we will try to protect it.

"With this Championship, we have taken the first step."