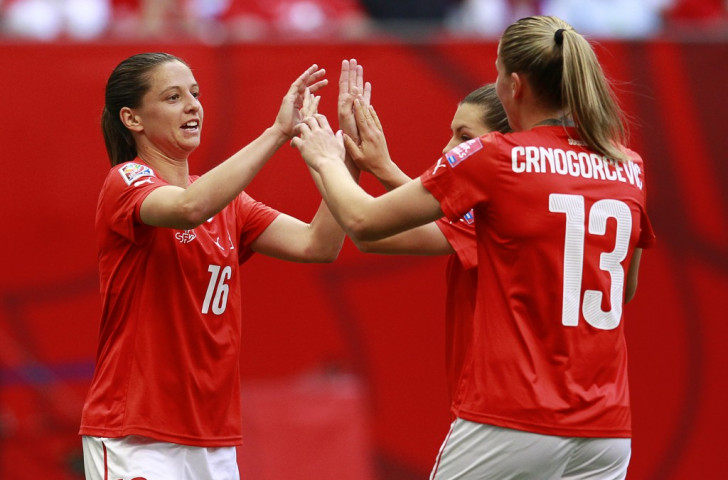 Fabienne Humm hit a rapid fire five-minute hat-trick, while Ramona Bachmann also bagged a treble as Switzerland produced a classy performance by thumping Ecuador 10-1 at the Women’s FIFA World Cup at the BC Place Stadium in Vancouver.

Humm’s superb individual display saw her net the quickest hat-trick in the tournament’s history as her nation recorded a comfortable win over their beleaguered South American opponents.

They were made to wait 24 minutes for the opening goal,  however, as Ecuador showed rare resilience in an otherwise toothless outing when Angie Ponce inadvertently turned the ball into her own net.

That set the tone for Switzerland to claim their first-ever World Cup win in style and they doubled their lead thanks to Eseosa Aigbogun.

With only a two-goal lead at the break, Switzerland came out for the second period with renewed intent and they struck five times within 14 minutes to completely kill the game as a contest.

Humm came to the fore and managed her personal milestone to make it 5-0, before Bachmann got in on the act by finding the net twice in a minute, before Ponce grabbed a scant consolation from the spot, although she then completed an unwanted double of own goals.

Martina Moser added her name to the scoresheet and Bachmann then rounded off the rout with her third and Switzerland’s 10th.

In the other match in Group C in Vancouver, defending champions Japan were made to work hard for their 2-1 win against Cameroon.

Aya Sameshima gave her side an early advantage by firing home a cross sent over by Nahomi Kawasumi, and shortly after Yuika Sugasawa’s header made it 2-0.

Ajara Nchout halved the deficit but it was too little, too late as Japan became the first team to book their place in the last 16.

Elsewhere, Kyah Simon’s double gave Australia a 2-0 victory in their Group D encounter with Nigeria at the Winnipeg Stadium.

After a scoreless first 29 minutes, the Australian team fashioned a move that would eventually yield the opening goal as Lisa De Vanna drove at the Nigerian defence before picking out Simon, who dinked the ball over goalkeeper Precious Dede.

The Nigerian outfit made life difficult for the Aussies and only a couple of fine stops from Lydia Williams kept their lead intact, before the points were all but wrapped up with Simon’s second 22 minutes from time.

Australia managed to hold out for a vital win in their pursuit of qualification and they finished the day in second place after the highly-fancied Americans could only draw 0-0 with Sweden.

Tomorrow’s action is due to see France take on Colombia in Group F in Moncton before Brazil’s Group E campaign continues when they face Spain at the Olympic Stadium in Montreal.

England then bid to bounce back from their opening game defeat in Group F when they entertain Mexico, and the evening’s match sees South Korea play Costa Rica.