“Recognising future trends in sports, the University World Cups are one way through which FISU keeps innovating. Bringing university sport to more school campuses enhances the student experience. The newest member of FISU events combine the best of games, entertainment and culture.” 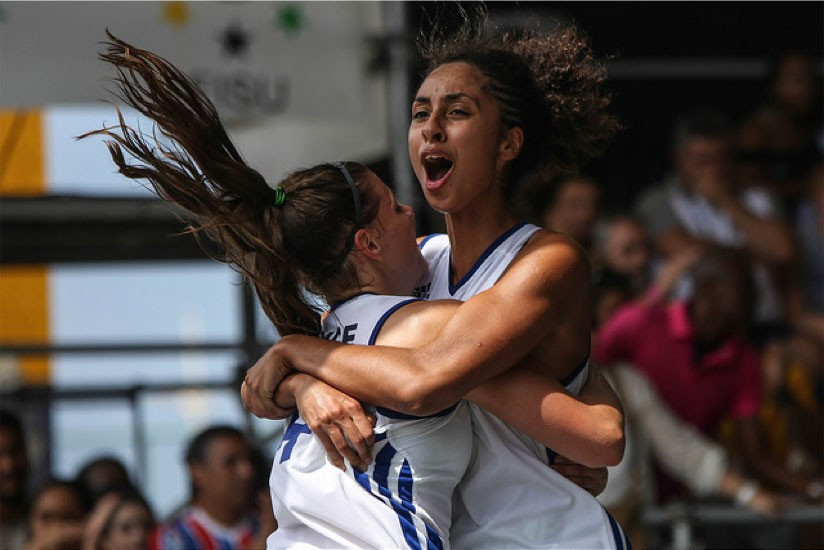 In 2022, University World Cups were held around the world in seven different sports.

A football event is planned for 2023 in China. There is perhaps no better legacy than giving young people a chance to take part in sports among an international community.

Through the University World Cups, FISU’s aim is to increase sports participation at universities and help student-athletes have university sports experiences that last a lifetime.

As the home of university sports, FISU employees’ day-to-day lives revolve around collaborating with global partners to keep innovating for the future of sports.

3x3 Basketball: The roots of the University World Cup

With all the sports options out there, why did FISU decide to start the University World Cup concept back in 2015 with 3x3 Basketball? That’s easy: 3x3 basketball is where culture, sport and innovation collide. Already, 3x3 Basketball is the most popular urban team sport in the world. 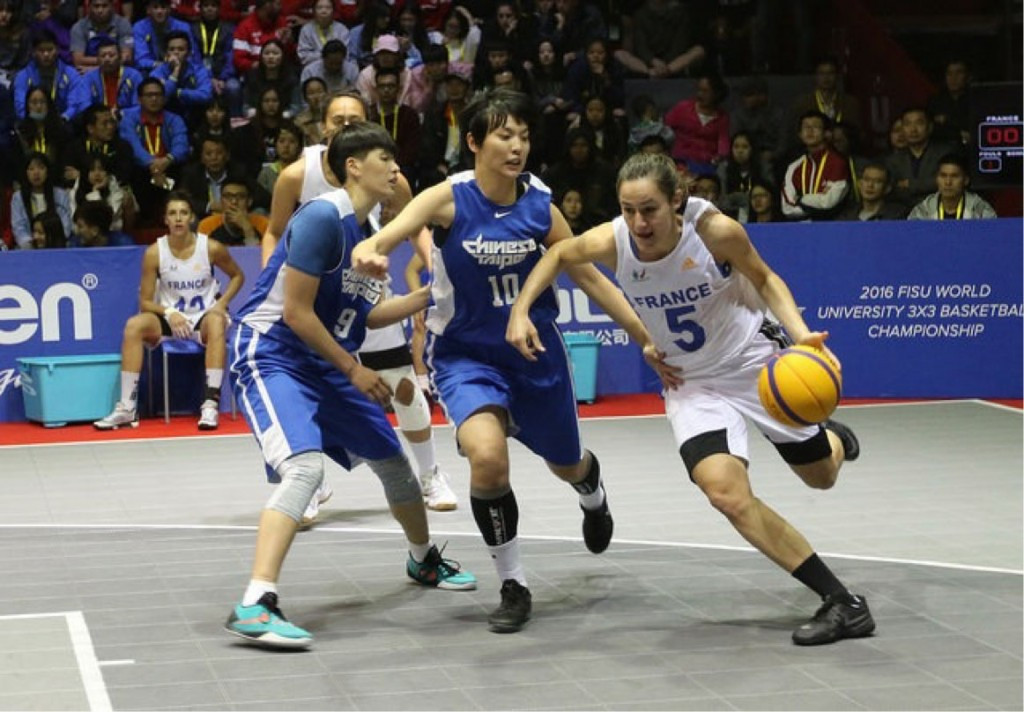 3x3 Basketball is a game pretty much everyone can play, anywhere in the world. With teams composed of three players, plus one possible substitute, it is easy to field a team. It is just players playing as no coaching is allowed during a competition.

The simplicity of the 3x3 game stands out: all you need is a hoop, a ball, some team-mates, and a little competition.

There is not even a mandatory surface; a tournament can take place on concrete, asphalt or an existing/temporary court. Bringing sport into the centre of university campus life was the goal FISU set out to achieve with University World Cups. The format has delivered. 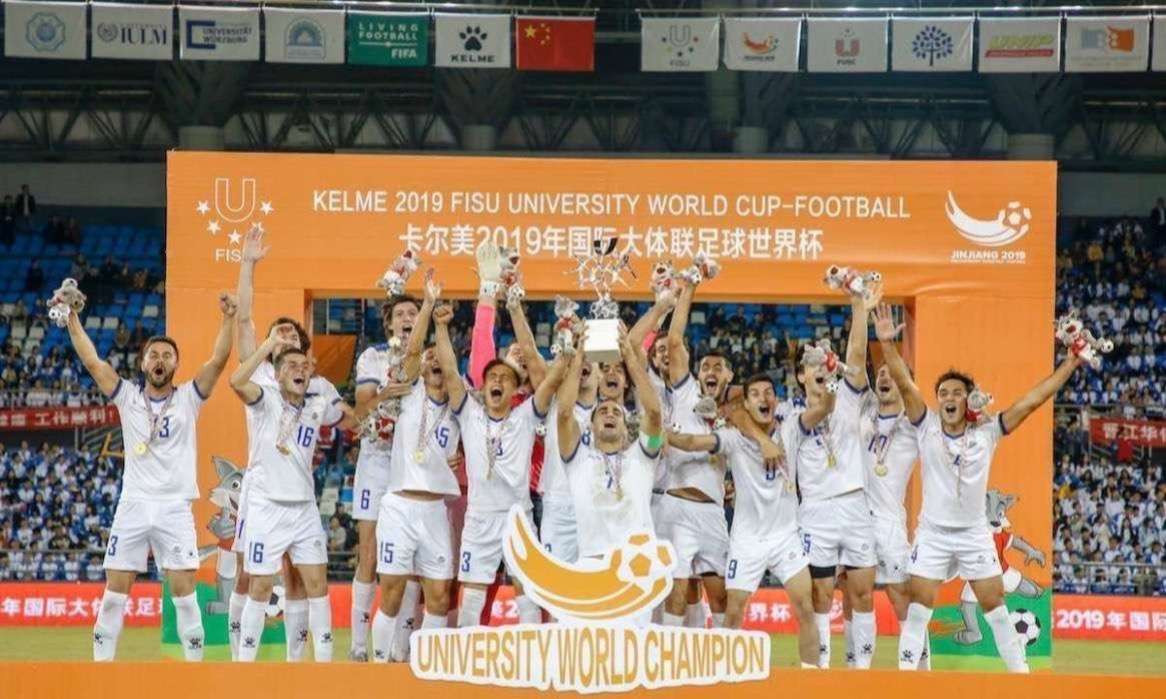 FISU's newest sports property set the bar high with its inaugural edition held in Jinjiang, China from November 21 to December 1, 2019.

The tournament in Jinjiang paved the way for the future of university-versus-university competition in the world's most popular sport.

The event was in the works well before the world finals took place in Fujian Province. Sixteen of the best men's teams and eight women's teams had booked their ticket to China through five continental qualifying tournaments that were held through 2018.

There were also quotas allotted to Federation of University Sports of China for home teams, as well as two wildcard teams in both the men’s and women’s draw. 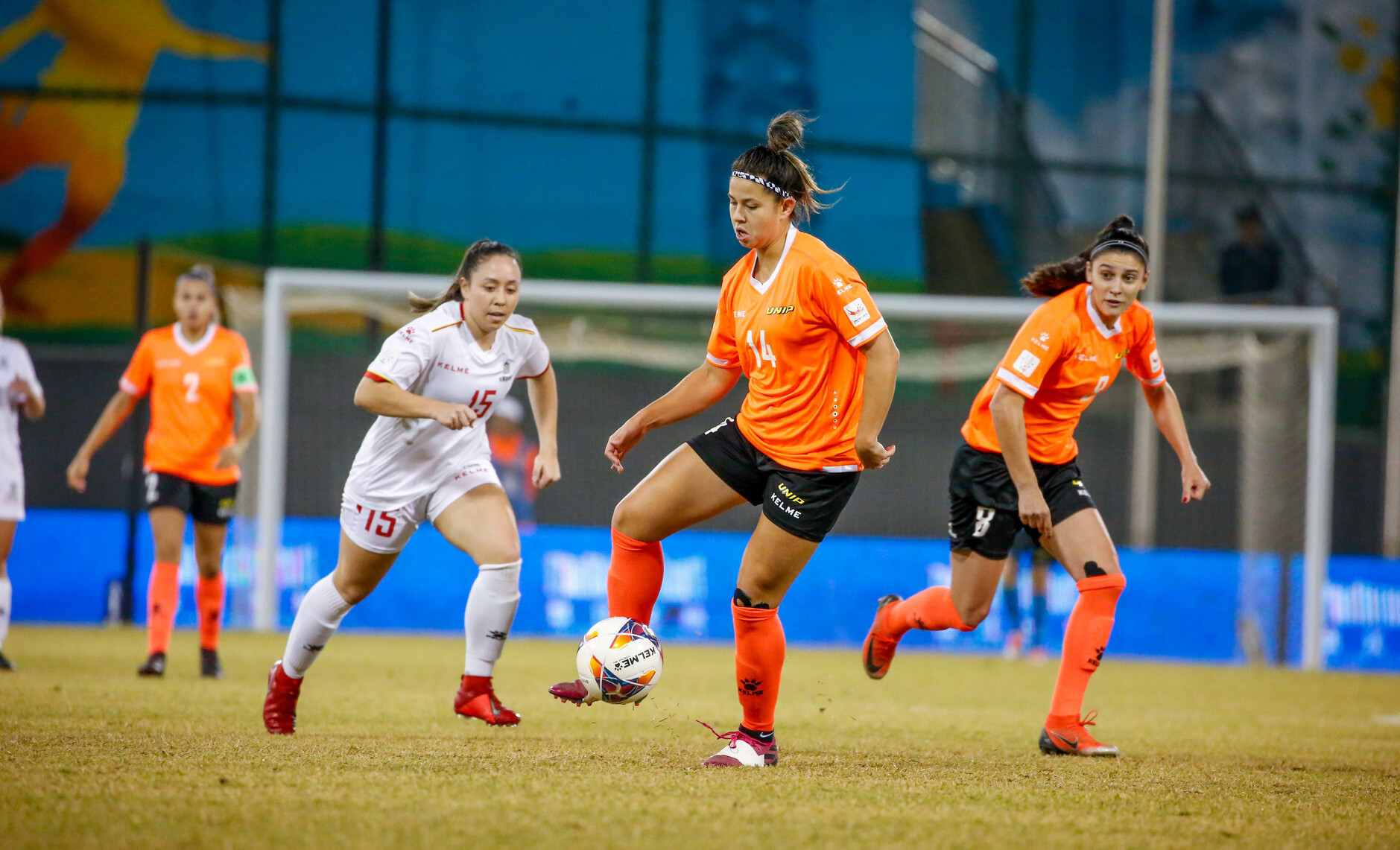 The 2022 edition  of the 3x3 basketball University World Cup was held in Istanbul in Turkey following the competition's move from Xiamen in China.

Paulista saw off Macquarie University of Australia in their final while Chinese Culture got the better of Monterrey ITES of Mexico. 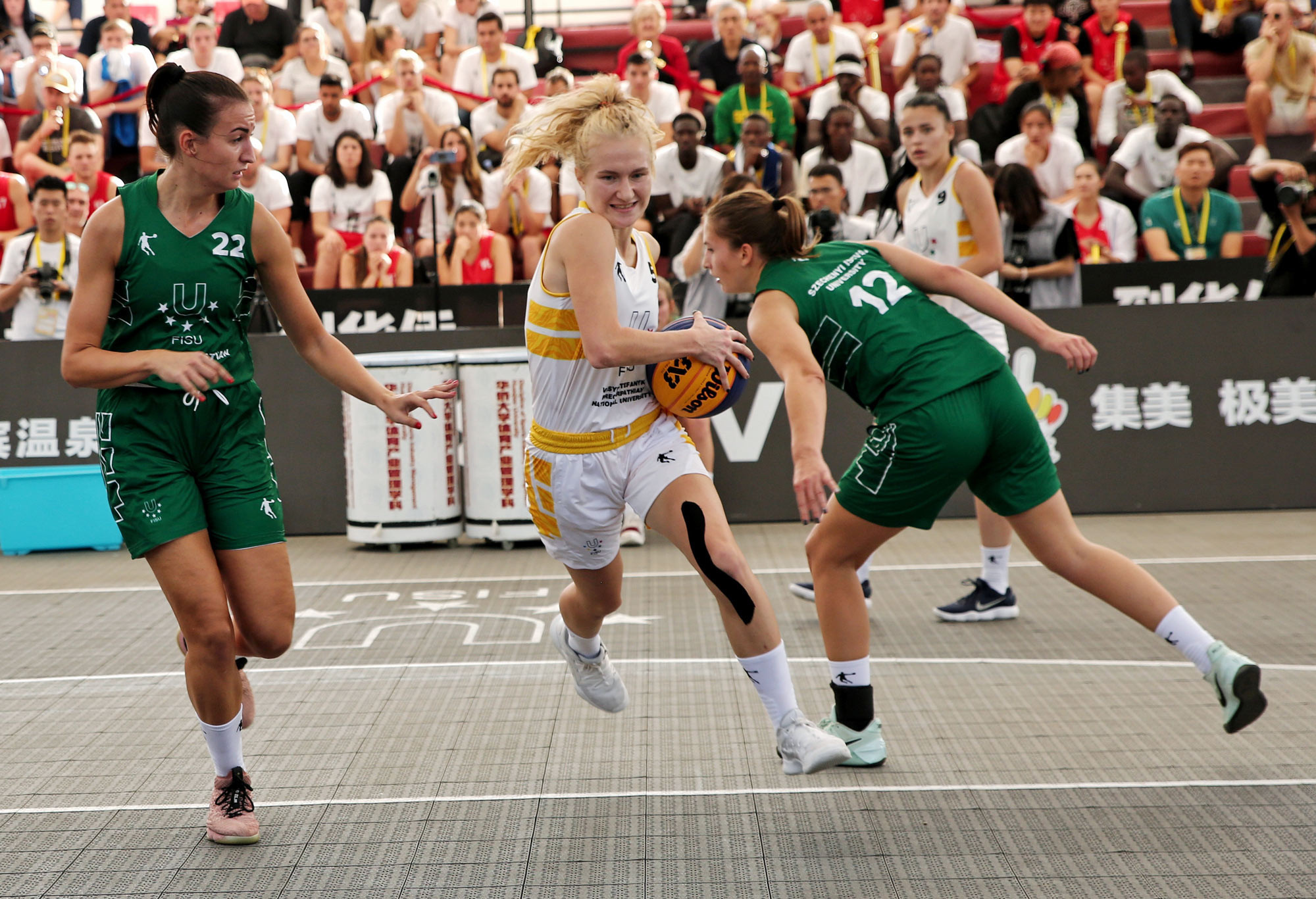 Since the inaugural edition, Huaqaio University in Xiamen has hosted this electrifying event on their home court. Huaqiao, therefore, automatically qualify for the finals. The rest of the teams have come through tough continental qualifying tournaments to earn their place in the finals. The 2019 finalists once again represented university teams from all continents.

The 2018 edition took place in Xiamen, China from November 15 to 18, when the tournament was still called the 3x3 FISU World University League.

Chinese teams won both the men's and women's competitions thanks to success for Huaqiao University and Tsinghua University respectively. After four days and seven games, two university 3x3 teams strode to centre court to accept the individual medals and team trophy bestowed upon the victors of the 3x3 FISU World University League finals. The two teams, though, took different paths to the title.

In Xiamen, the winning continued as the Chinese Culture University ran the table from preliminaries to finals. To take the title, the team defeated the University of Regina 21-12 in the final.

Mon-Altius Physical Education Institute, meanwhile, took a more circuitous route to the 2017 men’s title. The Mongolian team lost their first two games in the preliminary pool play before finding their groove in the knock-out rounds. Mon-Altius made an inspired run to the championship, defeating the University of Kragujevac of Serbia 21-17 in the finals.

The International Basketball Federation's then secretary general Patrick Baumann, who tragically died after suffering a heart attack in October 2018, claimed he was "very happy" with FISU’s work in developing the sport of basketball, particularly 3x3.

"We’ve been working on this for about 10 years.

"[FISU] brings together the best teams, with a very high level of competition.

"FISU was very fast to jump on the train to help organise 3x3 since basically the beginning. A total of 32 teams - 16 men and 16 women - from 23 countries competed for the medals. When the dust settled on the men’s side, McGill University beat France's University of Bordeaux. The Canadians defended their title, having also beaten the Frenchmen from Bordeaux in 2015.

The event also featured shoot-out and dunk contests, much to the delight of both the crowd and competitors.

The competition had an impressive reach. CCTV broadcast the games daily, while Eurosport also covered the event. Additionally, FISU TV live streamed all the games and contests to a global audience. 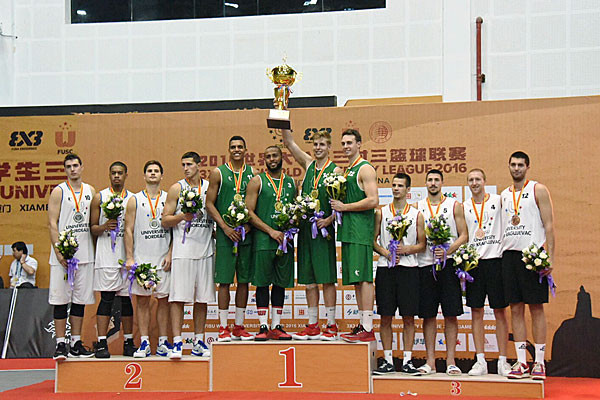 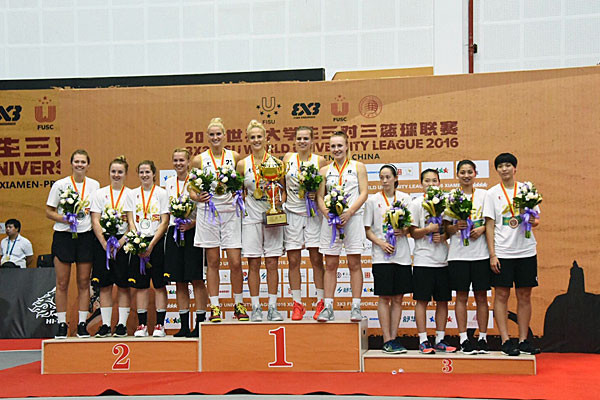 What started as an idea to bring elite sport events onto the middle of a university campus became a reality when Huaqiao University in Xiamen, China hosted FISU’s first international 3x3 basketball tournament where student athletes competed for their universities instead of their national team.

Dubbed the "World University League" for the first three years, the event proved so successful that FISU grew the programme to include football and changed to the University World Cup in late 2017.

The men's final, between the Université du Québec à Montréal of Canada and the University of Bordeaux of France, came down to the last play. The Canadian university came out on top with a 17-16 win.

Want to know more about the FISU University World Cups? Contact us!

The University World Cup Department wants to hear from you! Feel free to pepper us with your questions and comments about the World Cups - and where we’re going with it!