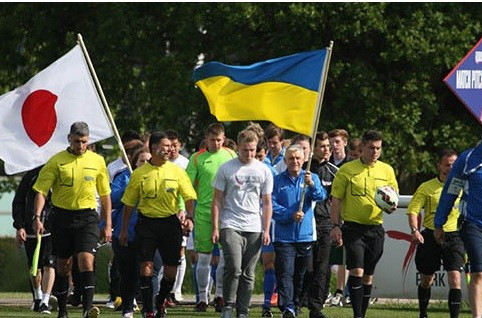 Reigning European champions and world number two ranked Ukraine were unaffected by their late start to their Cerebral Palsy Football World Championships campaign as they crushed Japan 16-0 at St George’s Park in Burton upon Trent in England.

Following the withdrawal of Iran, forced out of the tournament after they failed to obtain a visa, Ukraine were made to wait an extra two days before they made their bow at the competition in Group A.

Perhaps that even spurred them on as they demolished a Japan side who had lost their first fixture 10-0 to hosts England and who remain firmly rooted to the bottom of the group.

Captain Vlodomyr Antoniuk was the star for the highly-fancied Ukrainians as he scored eight, while Artem Krasylynykov notched four and Vitalli Romanchuk netted a hat-trick.

The Ukrainians, alongside England, are now certainties to reach the next round and their match, due to take place on Saturday (June 20), will decide the group winner.

Elsewhere, world champions and tournament favourites Russia were also in dominant form as they hammered Portugal 9-0.

The win saw the Russian side score their 17th goal from just two games and, barring a remarkable run of results, they are through to the knockout phase.

The other match to take place in Group B saw the Republic of Ireland claim a crucial win in their pursuit of qualification for the next round as they beat Australia 4-1.

Dillon Sheridan netted twice and both Gary Messett and Eric O’Flaherty were on target, while David Barber’s goal from the spot proved to be little more than a consolation strike.

The tournament is due to continue tomorrow when Brazil take on Venezuela and the United States play Scotland in Group C.