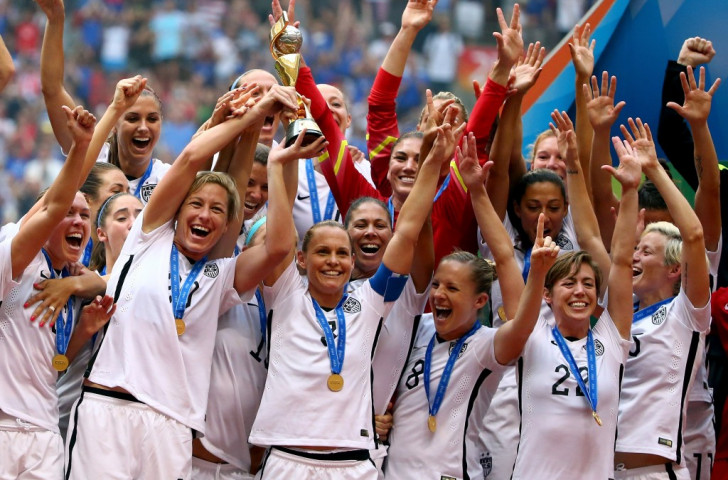 Carli Lloyd’s first-half hat-trick helped the United States clinch their third FIFA Women’s World Cup title in style as they breezed to a crushing 5-2 win over Japan in a thrilling final at the BC Place Stadium in Vancouver tonight.

The American side all but sealed victory as they found the net four times in the opening 16 minutes, with Lloyd the star performer, as Japan made a shambolic start to the defence of their title.

Lloyd gave her team the lead in the third minute, the quickest opener in the history of Women’s World Cup finals, when she rounded off a well-worked corner routine by converting Megan Rapinoe’s pull-back.

Lauren Holiday then got in on the act by volleying home from a Tobin Heath delivery to seemingly put the result of the final beyond all doubt.

But the misery was not yet complete for Japan as Lloyd completed her hat-trick in style, launching an audacious attempt from the centre circle which flew over the hapless goalkeeper yumi Kaihori to give the United States an incredible 4-0 lead.

Yuki Ogimi managed to pull one back midway through the first half, which brought the free-scoring of the opening period to a close, before the madness resumed after the break.

First, Julie Johnston inadvertently glanced the ball into her own net following a perfectly-flighted free-kick from Aya Miyama which reduced Japan’s arrears to two.

Any hopes of a comeback were ended almost instantaneously, though, as Heath added her name to the scoresheet to restore their three-goal advantage, and the Americans then saw out the rest of the match to ensure they got revenge for Japan’s penalties victory in the 2011 final.

The individual plaudits largely went to Lloyd, whose spectacular third capped off an incredible performance from the 32-year-old.

Picking up the ball in her own half, the midfielder spotted Kaihori off her line and her speculative effort was right on target, causing the Japan goalkeeper to scramble back and finger-tip her shot into the net.

That strike came after a training ground routine from a corner came off spectacularly as Rapinoe’s driven cross bamboozled the Japan defence and Lloyd was on hand to finish first time from the penalty spot.

The American veteran’s second was largely down to poor defending as Japan, who up until the final had only conceded three goals in the tournament, failed to deal with a free-kick and she reacted quickest to convert from close range.

Holiday’s volley, sandwiched in between Lloyd’s second and third efforts, ensured the most blistering of starts to the tournament’s showpiece contest and effectively sealed victory for the American side.

The result also saw the United States become the first team to claim three World Cup crowns as they moved ahead of Germany, who they beat 2-0 in a hard-fought semi-final.