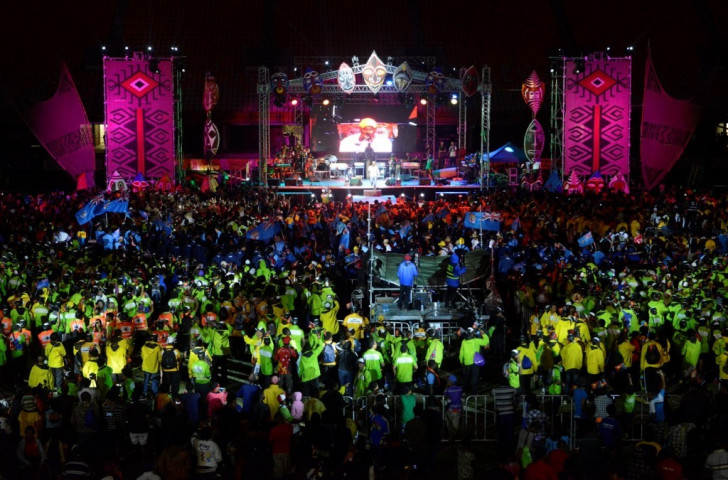 The curtain came down on Port Moresby 2015 here this evening with a festival-style Closing Ceremony that provided a party ending to the 15th Pacific Games, although several hundred people were unable to gain access to the the Sir John Guise Stadium because of problems with tickets.

Many locals desperate to gain entry for the event were denied access to the Stadium, even though some of them had purchased tickets for the Ceremony.

It had been reported that the Closing Ceremony was sold out yet many seats were unavailable due to the placement of the main stage located in the centre of the field directly facing the grandstand.

This meant that the other side of the Stadium remained empty as it faced the back of the stage, meaning anyone sitting there would not have been able to see the Ceremony unfold.

For those that were able to get in, Makoda Productions, the company behind both Ceremonies, delivered a fun-filled spectacle which included traditional Papua New Guinea culture alongside several star music acts.

It began with a stirring rendition of the Papua New Guinea national anthem, before the athletes made their entrance into the Stadium.

In keeping with the tradition of Closing Ceremonies, they all emerged together rather than in alphabetical country order, joining the 3,000 volunteers who had already taken their places at the front of the stage.

The Governor General of Papua New Guinea, Sir Michael Ogio, was the first to address the crowd, before a video of highlights from the last fortnight was shown, with the athlete theme song “Together We Can” by Jamie Lee in the background.

After sections entitled “Tumbuna Musik” and “Wan Solawara”, both of which included traditional music and dances to reflect Papua New Guinea's culture, Pacific Games executive director Andrew Minogue took to the stage to announce the winners of the best male and best female award.

The 2006 Commonwealth Games gold medallist was also announced as the Athlete Representative to the Pacific Games Council (PGC) Executive Board.

She was unable to collect the award personally, though, as she is now in Kazan preparing for the FINA World Championships, where she will represent France.

PGC President Vidhya Lakhan then addressed the crowd, declaring Papua New Guinea as a “wonderful host” of the Games.

“Everyone involved became one team with one objective that was to deliver on the promises you made to us back in 2009,” he said.

“What a wonderful two weeks of sporting excellence we've had, enriched by Papua New Guinean hospitality.

“It has been a thoroughly successful Pacific Games and congratulations to everybody involved, especially the volunteers.

“You have indeed raised the bar to another level.”

The Pacific Games Council flag was handed over to 2019 host country Tonga, whose ability to be able to host the event is in severe doubt because of financial problems.

Lakhan, PGC President since 2003, the officially declared the 2015 Games closed.

A spectacular fireworks display then brought the eveningand Port Moresby 2015, to a close in stunning style.