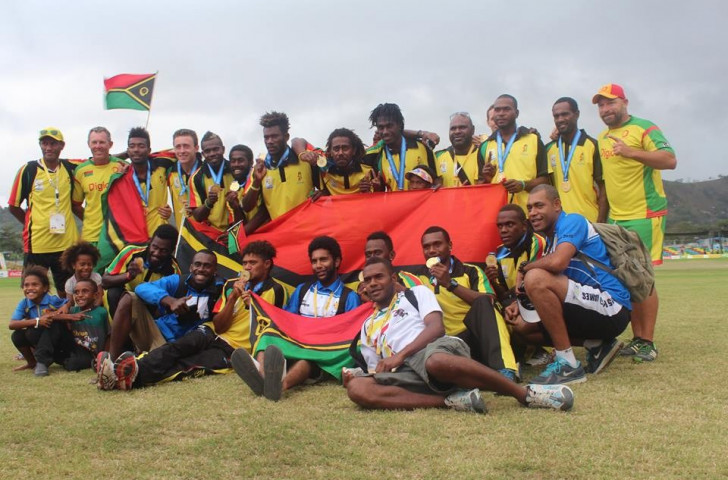 Vanuatu's team produced a stifling performance with the ball, bowlig the home side out for 98, with Patrick Matautaava the pick of the bowlers, taking 3-16.

They were then able to back up that display with the bat as star performer Nipiko scored a stylish 49 off just 37 balls, including seven fours and a six, to help guide his side to an historic triumph with 15 balls to spare.

The result saw Vanuatu end the dominance of Papua New Guinea in the event, winners of every Pacific Games title since the sport was introduced onto the programme at Suva 1979.

The hosts were forced to field a weakened side at the event owing to their first team’s participation in the International Cricket Council (ICC) World Twenty20 Qualifier, which began on July 6 and is scheduled to end on July 25, an event being jointly hosted by Ireland and Scotland.

That should take nothing away from the Vanuatu team, though, who managed to claim gold without suffering defeat throughout the tournament.

“It was a great game for the crowd and everyone, and we got over the line, so it was fantastic.”

Papua New Guinea’s innings was littered with problems from the start as opener Riley Hekure was run out by off-spinner Wolford Kalworai early on.

Once Christopher Ami bowled by Andrew Mansale for 33, the hosts never looked like posting a good enough total and wickets fell at regular intervals before they were eventually dismissed two runs short of a hundred.

Chasing only 99 to win, Vanuatu slipped to 7-2 in reply as opening pair Joshua Rasu and Trevor Langa fell cheaply, before Matautaava and a Nipiko began to build a platform for victory with a stand of 29 runs.

Matautaava was bowled by Alei Nao, sparking a change in tempo from Nipiko as he began to take the game to the Papua New Guinea bowlers.

It proved to be an innings that would propel his side to gold, and despite edging a Nao delivery to wicket-keeper Langa with his team 11 runs short of victory, Vanuatu held on to claim the gold medal.

The bronze medal went to Tonga following a seven-wicket victory over New Caledonia, chasing down a tricky total of 163 with four balls remaining.