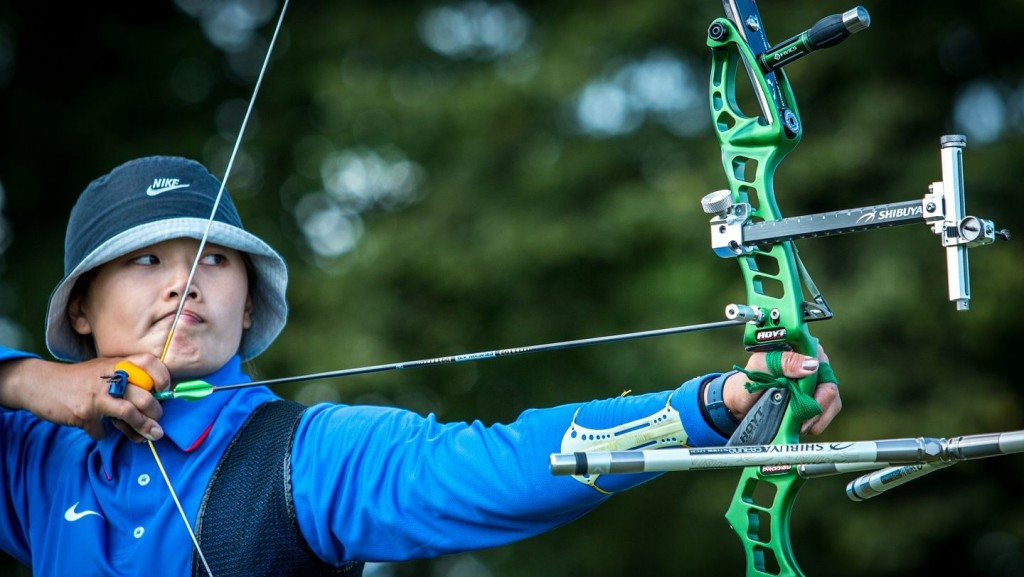 Five women’s and six men’s individual quota places for for next year's Olympic Games in Rio de Janeiro were taken up during the third elimination round of recurve competition at the World Archery Championships in Copenhagen.

Germany, Indonesia, Chinese Taipei, Ukraine and the United States all claimed one ticket each in the women’s competition held outside the Danish Parliament building Christiansborg Palace, while Canada, Colombia, Japan, Indonesia, Ukraine and Venezuela profited in the men’s event.

The women have been reseeded according to their qualification results and will compete in a bracket starting from the quarter-finals.

As the two highest scorers out of the six on the ranking round, Sartori and Lipiarska are pre-seeded into the semi-final.

As there is only one archer from each nation competing, both semi-final winners and the winner of the third-place playoff will claim the three Olympic spots.

Home favourite Casper Lauridsen is one of 13 archers who will compete for the two remaining men’s places.

The secondary men's tournament is due to begin from the round of 16 phase with the two semi-final winners obtaining the quota spots.

Hansen’s route to the semi-finals saw him overcome Switzerland’s Roman Haefelfinger, as well as reigning world champion, Mike Schloesser of The Netherlands, and Croatia’s Mario Vavro.

A winning margin of six against Ravenscroft sets up a showdown against the eighth seed Rajat Chauhan of India, on Saturday (August 1).

“I think he got a little nervous, but I shot my game and performed the best I could.”

The women’s compound gold medal match will be contested by South Korea’s Kim Yun Hee and the US’s Crystal Gauvin.

Gauvin upset Colombian top seed Sara Lopez, the 2014 Archery World Cup winner and record holder for the 15-arrow match, by a point in the semi-finals.

Seventh seed Kim beat Russia’s Natalia Avdeeva and Mariia Vinogradova in the quarter-finals and semi-finals respectively and now has the opportunity to win her nation’s first-ever compound world title.

With the scores tied at 5-5, second seed Ki scored a slightly better nine in the shoot-off for victory and will now go on to face Chinese Taipei’s Lin Shih-Chia, the top seed who got the better of India’s Laxmirani Majhi in the other semi-final.

The gold medal match is set to take place on Sunday (August 2), following the battle for bronze between Choi and Majhi.

In the men's gold medal match, South Korea's Kim Woojin will face The Netherlands' Rick van der Ven, while the losing semi-finalists, Elias Malave of Venezuela and Takaharu Furukawa of Japan, meet for the right to finish third.