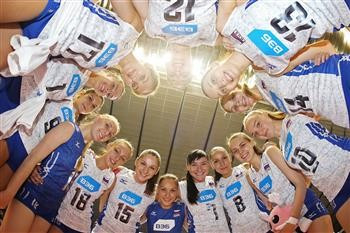 Frontrunners Russia completed the first round of the International Volleyball Federation (FIVB) Women's World Cup in Japan with an unbeaten record following a straight-sets victory against Cuba.

Nataliya Obmochaeva had another good scoring game to finish with 16 points in Tokyo as she and her team mates cruised to a 25-19, 25-13, 25-18 success to make it five wins out of five.

Meanwhile in Matsumoto, United States defeated Algeria 25-7, 25-2, 25-5 to take their win-loss record to 4-1 and sit in second after the first round.

Tetori Dixon led the US once more in the scoring department with 16 points, equating to more than the overall point output of the Algerians, while Megan Easy contributed 12 points, and Nicole Fawcett and Kelsey Robinson added 10 points apiece.

In the other match in Tokyo, Argentina capitalised on an error-ridden performance from Kenya to triumph 25-12, 25-17, 25-20 and claim their second victory, led by Sol Piccolo with 11 points.

There was also a win for Serbia in Matsumoto as Tijana Boskovic scored 17 points to spearhead her country's 25-16, 25-19, 25-16 success against South Korea.

Following rest days tomorrow and Saturday (August 29) action is due to resume in Japan on Sunday (August 30) with the first set of second-round fixtures across the cities of Sendai and Okayama.