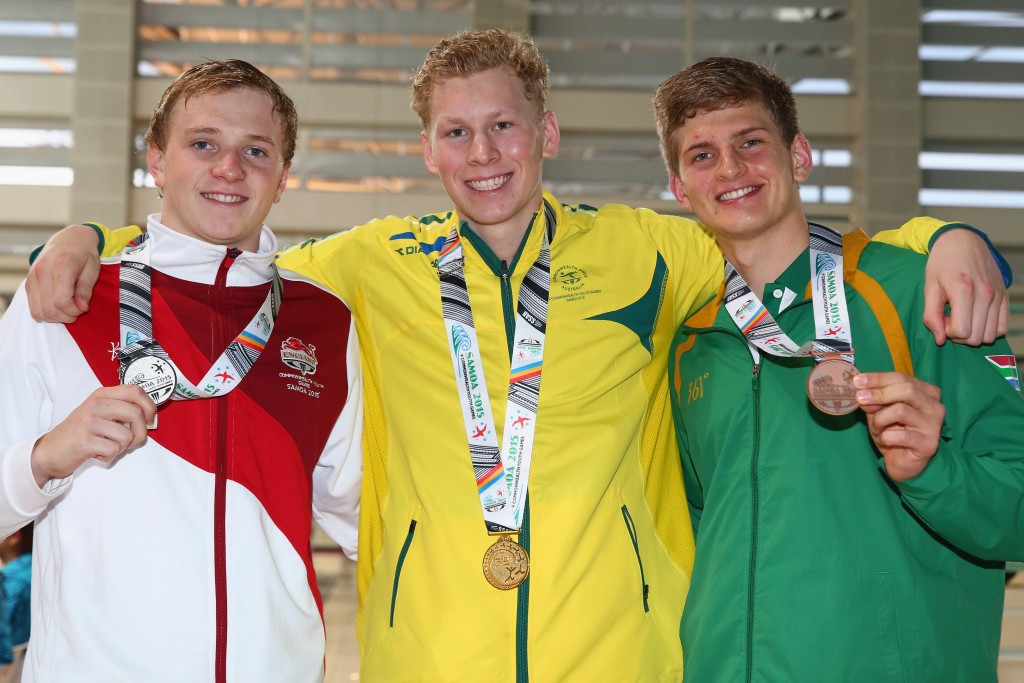 Reigning world junior champion Clyde Lewis of Australia breezed to a commanding win in the boy’s 200 metres individual medley to secure his fifth Commonwealth Youth Games gold as swimming action at Samoa drew to a close here this evening.

Lewis clocked 2min 02.40sec, just over two seconds outside of the time which handed him the World Junior Championships crown in Singapore in August, to finish ahead of England’s Joe Litchfield, while South African Neil Fair picked up his third bronze of the Games as he came through to take third.

Fair’s teammate Zane Waddell again proved formidable over one lap of the pool as he cemented his status as the event’s sprint king by adding the boy’s 50m freestyle title to his butterfly and backstroke crowns with a time of 22.85sec.

The top three in the race were separated by a slender 0.10 second margin, with Australian Jack Cartwright sealing silver and team-mate Vincent Dai bronze.

Waddell then bagged his fourth Samoa 2015 gold as he led South Africa to the boy's 4x100m medley relay title alongside Neil Fair, James Isemonger and Brendan Levy, ending the Australian stranglehold on the team events, as they posted 3:46.33.

Australia finished in an unfamiliar second place with England ousting New Zealand in a tight race for bronze.

Perennial individual bronze medallist Shayna Jack was able to finally get her hands on gold as she reigned supreme in the girl’s 50m freestyle with a time of 25.71.

In perhaps the most dramatic race of the swimming competition at Samoa 2015, 50m world junior record holder Gabrielle Fa’amausili of New Zealand and South African Erin Gallagher were each awarded silver as they couldn’t be separated, both clocking 25.82.

The success continued for the Australians, who have been the dominant nation in the pool throughout the event, as Lucy McJannett led home a one-two for her nation by edging Calypso Sheridan in the girl’s 200m individual medley.

McJannett, a member of the Australian 4x100m and 4x200m relay teams who both broke the world junior record in Singapore, touched the wall in 2:14.57, with Tazmin Pugh of England securing bronze.

Australia's girl's 4x100m medley relay team were able to succeed where the boys had failed as the team of Gemma Cooney, Sheridan, Lucia Lassman and Jack clocked 4:09.28 to seal the title ahead of England and South Africa.

Darwent’s compatriot Edward Baxter then produced a superb swim to reign supreme in the boy’s 200m breaststroke, maintaining a good pace throughout before finishing strongly on his way to clocking 2:15.80.

His time was nearly three seconds in front of Fu Kang Wong, who was unable to complete the 50m, 100m and 200m treble as he had to settle for silver.

The English contingent made sure they ended the final day of swimming action with a hat-trick of golds as Layla Black sealed the girl’s 200m breaststroke crown in 2:30.99, ahead of Australia’s Sheridan and South African Kaylene Corbett.